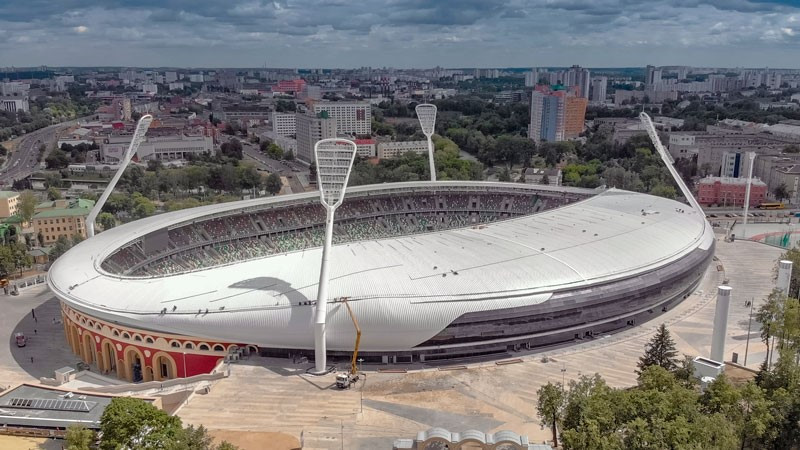 Celebrations marking one-year-to-go until the start of the 2019 European Games in Minsk have been held across the Belarusian capital.

They culminated with the re-opening of the iconic Dinamo Stadium and the unveiling of a Minsk 2019 countdown clock.

Members of the European Olympic Committees joined the organisers of the second edition of the event for a full range of activities to mark the occasion.

The day began with a 10 kilometres charity run from the Dinamo Stadium to the headquarters of the National Olympic Committee of the Republic of Belarus (NOC RB).

Proceeds from the run will go to a local charity that works with disadvantaged children.

The re-opening of the Dinamo Stadium, which will host the athletics events at Minsk 2019 as well as the Opening and Closing Ceremonies, was commemorated with a music concert, athletics relay, football match and fireworks display.

Renovation of the multi-purpose venue started long before Minsk was awarded the European Games and took six years to complete.

"In exactly 365 days, the finest European athletes from 15 sports will be assembled here for the Opening Ceremony prior to competing for European Games’ glory and, in many instances, the opportunity to qualify for the Olympic Games Tokyo 2020."

George Katulin, chief executive of the Minsk 2019, added: "Tonight is a really exciting moment for me for a number of reasons.

"On a personal note, this is the second renovation of Dinamo Stadium that I have been involved with, the first being as a volunteer for the refurbishment ahead of the Olympic Games Moscow 1980 as we hosted some of the football matches.

"The Olympic Cauldron is still a focal point within the stadium.

"The renovations also mean that the most important stadium in Belarus can continue to make history and will be a great continuation linking the Olympic Games of 1980 with the European Games of 2019.

"I am proud and happy for my team at MEGOC (Minsk 2019 European Games Organising Committee) and all the sports fans in Belarus.

"This is a really great celebration."

A Minsk 2019 countdown clock located outside the Sports Palace, an official venue for the European Games, was also activated during the ceremony by Belarus President Alexander Lukashenko, who is also the head of NOC RB.

The day after the one-year-to-go celebrations, the stadium held a track and field event which served as a test event for Minsk 2019.

It featured teams from Belarus, Ukraine, and Baltic and Balkan countries.

Minsk 2019 also marked the occasion with the release of a new website, which can be accessed by clicking here.

Ten of the 15 sports will act as qualifiers for the Tokyo 2020 Olympic Games, with the European Games also counting as the official European championships for four sports.

There will be 91 men’s events, 89 women’s events and 21 mixed events in total, with 115 universality spots available.

All 12 sporting venues, of which 11 are existing facilities, will be located within a maximum 30 minutes’ drive from the Athletes’ Village, ensuring athletes can easily travel to training and competition facilities.