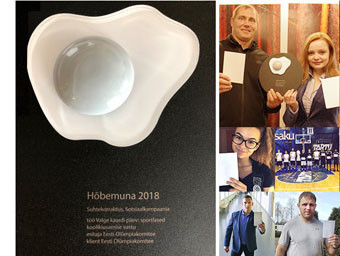 The Estonian Olympic Committee (EOK) has received a "Silver Egg" award for an anti-bullying campaign they staged around the 2017 International Day of Sport for Development and Peace.

Officially declared by the United Nations in 2013 and supported by the International Olympic Committee, the day celebrates the power of sport to drive social change and community development, as well as fostering peace and promoting understanding.

It falls each year on April 6, the anniversary of the first Modern Olympic Games in Athens.

As part of the #WhiteCard campaign, figures in the sports community are invited to share a photo of themselves on social media using the hashtag and holding up a symbolic white card to show their commitment to peace efforts worldwide.

Estonia celebrated the day for the first time in 2017 with the EOK's Athletes' Commission opting to focus on school bullying.

Communications manager Maris Lindmäe and Athletes' Commission chair Gerd Kanter, an Olympic discus gold medallist, were among those to get involved with more than 150 Estonian athletes taking part in all by holding up the white cards.

Kanter is also the chairman of the European Olympic Committees' Athletes' Commission.

Its success led to the Silver Egg being awarded at the Estonian Festival of Creativity awards, in the PR social awareness campaign category.

The EOK is now looking forward to this year's International Day of Sport for Development and Peace on Friday.