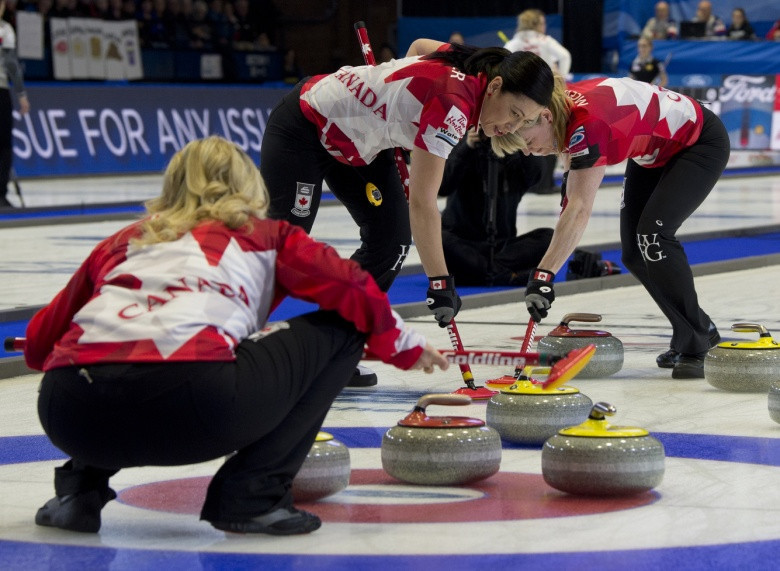 Hosts Canada remain as the only undefeated team left at the World Women's Curling Championship as they saw off Olympic gold medallists Sweden.

The home side, skipped by Jennifer Jones, have now won all eight of their matches at the North Bay Memorial Gardens to sit top of the round-robin phase.

Anna Hasselborg's Swedes, who won the Olympic title at Pyeongchang 2018 last month, had also won eight matches without defeat before today's contest but have now slipped into second behind the Canadians having played a game more.

Canada came through 8-4 with Jones' score of three in the seventh end proving crucial.

"Playing against the reigning Olympic gold medallists, we knew that we were going to have to play our best," said Jones, who did not skip Canada at the Olympics.

"I don't know if it was quite our best, but we played well from start to finish.

"We made some big shots when we had to, to take control of the game.

"It's all about the big shots and we're just getting by those guards with great sweeping."

South Korea are third on a 6-2 record after they also edged United States 9-8 in the morning.

Russia moved onto the same record as the Koreans, however, after enjoying two victories, 9-5 against Czech Republic and 6-2 against Germany.

The Czech defeat was their only contest of the day and they are now one of three countries on a record of 4-4, alongside the US and Japan.

The US also beat China 8-4 today, while the Japanese saw off Italy 8-6.

Japan did suffer a defeat too, however, going down 10-7 to Scotland.

It was a good day for the Scots who also saw off China 8-7 to improve their record to 3-6.

Elsewhere, there were mixed fortunes for Denmark who beat Italy 8-7 after going down to Switzerland 7-5.

Two more days of round robin play are scheduled with the top two countries moving straight into the semi-finals.

Those placed third to sixth will play-off for the right to join them.

The gold medal game will be played on Sunday (March 25).