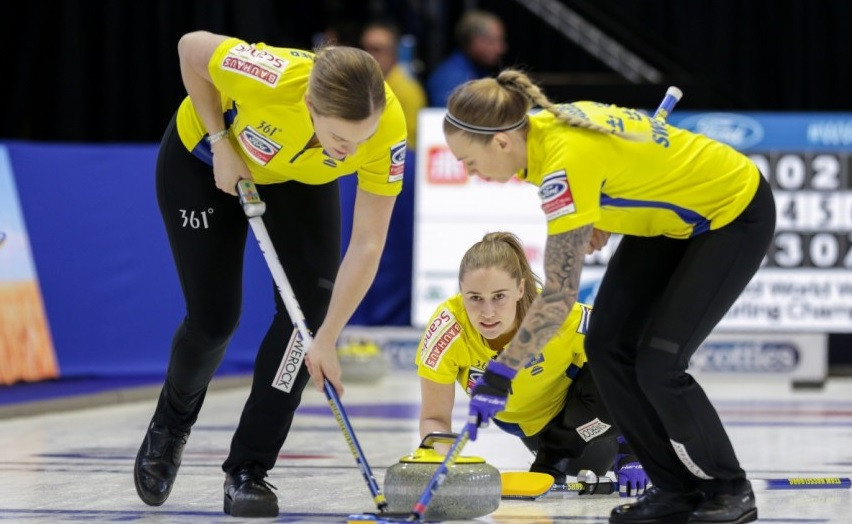 Olympic gold medallists Sweden retained top spot as they recorded their seventh consecutive win with a narrow victory over Switzerland at the World Women's Curling Championships in Canada.

The recently-crowned Olympic champions overcame their Swiss opponents 5-4 in the evening session to preserve their 100 per cent start to the tournament at the North Bay Memorial Gardens.

Hosts Canada are the only other unbeaten team after they beat Scotland 8-6 as the round-robin phase passed the halfway stage.

The squad, led by skip Jennifer Jones, are hoping to banish their Olympic demons following a disappointing showing at last month's Games in Pyeongchang with a solid performance at the competition on home soil.

Sweden, who earlier ousted the Czech Republic 8-6, lead the way having played one more match than their Canadian counterparts and both sides are on course to qualify for the knock-out round.

"We were up three nothing after three ends so I thought that was good, just a couple of shots in the middle that got us behind," said Jones after the victory over Scotland.

"I made a really big shot for three which felt great and we played really well.

"You don't need any extra motivation at a World Championship that's for sure, all the teams are great and we play those teams [South Korea and Sweden] and they're great.

"So, we'll see what we can do tomorrow."

South Korea, surprise silver medallists at Pyeongchang 2018, occupy third spot with a five win and one loss record from their opening six matches.

The Winter Olympic host nation thrashed China 12-3 in today's evening session to remain in contention with the leaders.