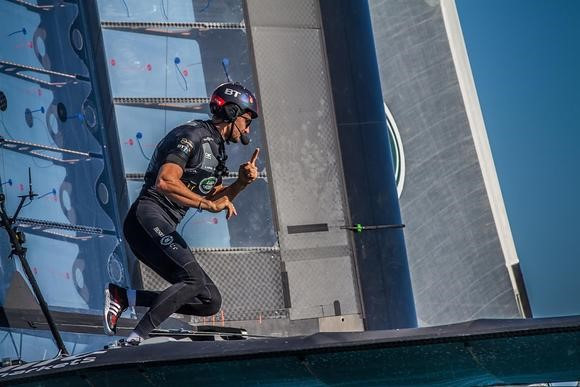 Rio 2016 gold medallist Giles Scott is set to make his Extreme Sailing Series debut in the season finale in Los Cabos, Mexico from November 30 to December 3.

30-year-old Scott replaces four-time Olympic champion Ben Ainslie, who is Land Rover BAR’s Team Principal and Skipper and raced with the Academy for the penultimate Act in San Diego last month, as helmsman.

This is not the first time that Scott has raced for a Land Rover BAR team as he was team tactician for the 35th America’s Cup, held in Great Sound, Bermuda, last June.

Alongside the racing, Scott will spend time mentoring the young team of sailors on the Land Rover BAR Academy team.

Commenting on his new position, Scott said "I'm excited to be heading to Mexico to race with Land Rover BAR Academy for the final event of the 2017 series.

"We have all been following the team's progress for the past two years and we are proud of their efforts particularly in winning the Red Bull Youth America's Cup last summer.

"This will be my first time sailing on the GC32 and I'm looking forward to getting amongst this high octane competitive fleet."

The Land Rover BAR Academy was launched in January 2016 as a pathway into the America’s Cup and so far it seems to be meeting with some success as Neil Hunter, who was promoted to the senior team in early 2017, was the youngest sailor to compete at the 35th America’s Cup.

Other former Academy members to enjoy professional success are Annabel Vose, who joined the Volvo Ocean Race team, and Chris Taylor, who has secured the helm spot for Team Extreme Mexico at this week's Extreme Sailing Series event.

Speaking about his progress from the BAR Academy, the 23-year-old said: "The programme has been hugely valuable for my sailing career, it's provided great opportunities and the chance to race with Team Extreme Mexico in the final Act of the ESS circuit tops them all."