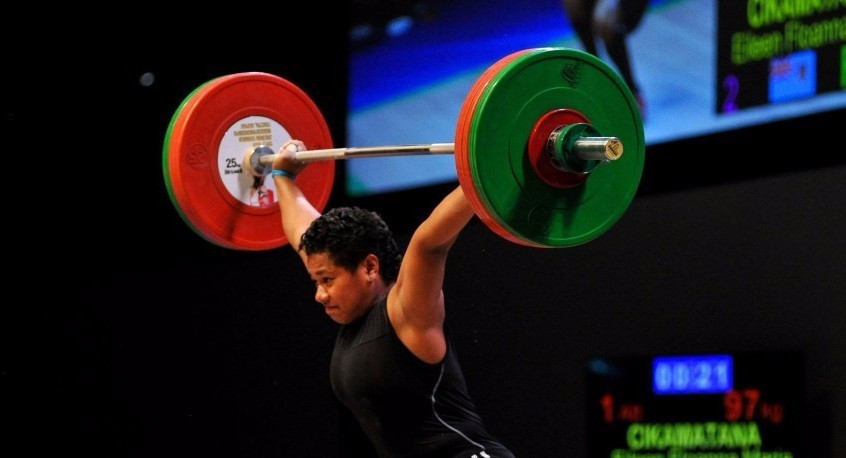 One of the best teenage weightlifters in the world has chosen not to compete at the International Weightlifting Federation (IWF) World Championships, where she had an outstanding chance of winning a first ever medal for Fiji, because of a clash with her exams.

The absence of rivals from China and Kazakhstan, two of the nine nations banned from the sport for a year, was another factor in the decision by 18-year-old Eileen Cikamatana, who had the fourth highest entry total in the 90 kilogram class.

Cikamatana, a silver medallist at the Junior World Championships, is the Oceania champion, and hot favourite for gold at next year’s Commonwealth Games, but she will compete instead in the Pacific Mini Games in early December, after her exams.

“It has been a busy year for travelling, and I am way behind with my studying,” said Cikamatana, who has competed this year in Australia twice, Japan, Turkmenistan, France and at her home base in New Caledonia.

Rather than travel to Anaheim, California – which hosts the World Championships from November 28 until December 5 - her final trip of 2017 will be to Vanuatu, which hosts the multi-sport Mini Games from December 4 to 15.

“I have never been to America and I would like to go,” said Cikamatana from Noumea, where she lives and trains for six hours a day at the Oceania Weightlifting Institute, coached by Paul Coffa.

“I have asked my parents about it and they said, ‘Study comes first.’

"The exams are at the end of November and that’s my first priority now, not the World Championships.

“I’d like to compete but everybody is not there – we don’t call that a competition.

"I really want to go against the best, against Russia, Kazakhstan, especially China.

“It doesn’t matter where or when the competition is, if they are all there I will go for it and I will win it.

"If I compete against clean athletes on equal terms, I will win it.”

Fiji has never won a medal at the senior Worlds, and no Pacific Islander has won one since Manuel Minginfel, of Micronesia, took a 62kg clean and jerk silver in 2006.

Cikamatana, whose best total of 253kg this year is higher than any other 90kg lifter competing in Anaheim, already has Tatiana Kashirina, the great Russian super-heavyweight, in her sights for next year.

The record she is targeting is the 90kg clean and jerk of 155kg, set in 2009 when Kashirina was 18, the same age as Cikamatana now.

“I want to beat that record at the Commonwealth Games,” said Cikamatana, who moved to the Oceania Institute in January 2016.

She was spotted at in a talent identification programme in Levuka, Fiji, and coached at the mountaintop Jungle Gym by Joe Vueti, Fiji’s national coach, before moving to New Caledonia.

Cikamatana weighs only 81kg, which puts her in a difficult position for the Tokyo Olympics, said Coffa, the Oceania Weightlifting Federation general secretary who has been a very successful coach for decades.

The IWF is expected to dispense with the 90kg category in the reduced programme for the next Olympic Games.

“Until she gets to 90kg she won’t be competing in 90-plus and she’s still very young,” said Coffa.

"We have three years to Tokyo.

“This girl has everything, she trains so hard and has improved so much – it’s beyond your imagination.”

Cikamatana is not the only teenage medal prospect absent from Anaheim.

Colombia’s Yeison Lopez, the 18-year-old Junior World champion at 77kg and a very strong contender in that category, is also prioritising a regional contest, the Bolivarian Games in Santa Marta, Colombia, that started on Saturday (November 11).

There was some bad news for Coffa this week when a Samoan lifter, the super-heavyweight Iuniarra Sipaia, tested positive – the first doping case by an Oceania lifter in 10 years.

“I was so proud of the fact that Oceania was clean for 10 years – the one thing I wanted to keep while I was in charge was that record of no positives.

“But you can’t keep an eye on everybody in the Pacific region – it’s an area that covers one-third of the world.

“I don’t know if it was a national test, or if it was at the Commonwealth Championships (in Australia in September).

“I have always wanted to say we are the cleanest continent, and we are still, but now we have been tainted.”