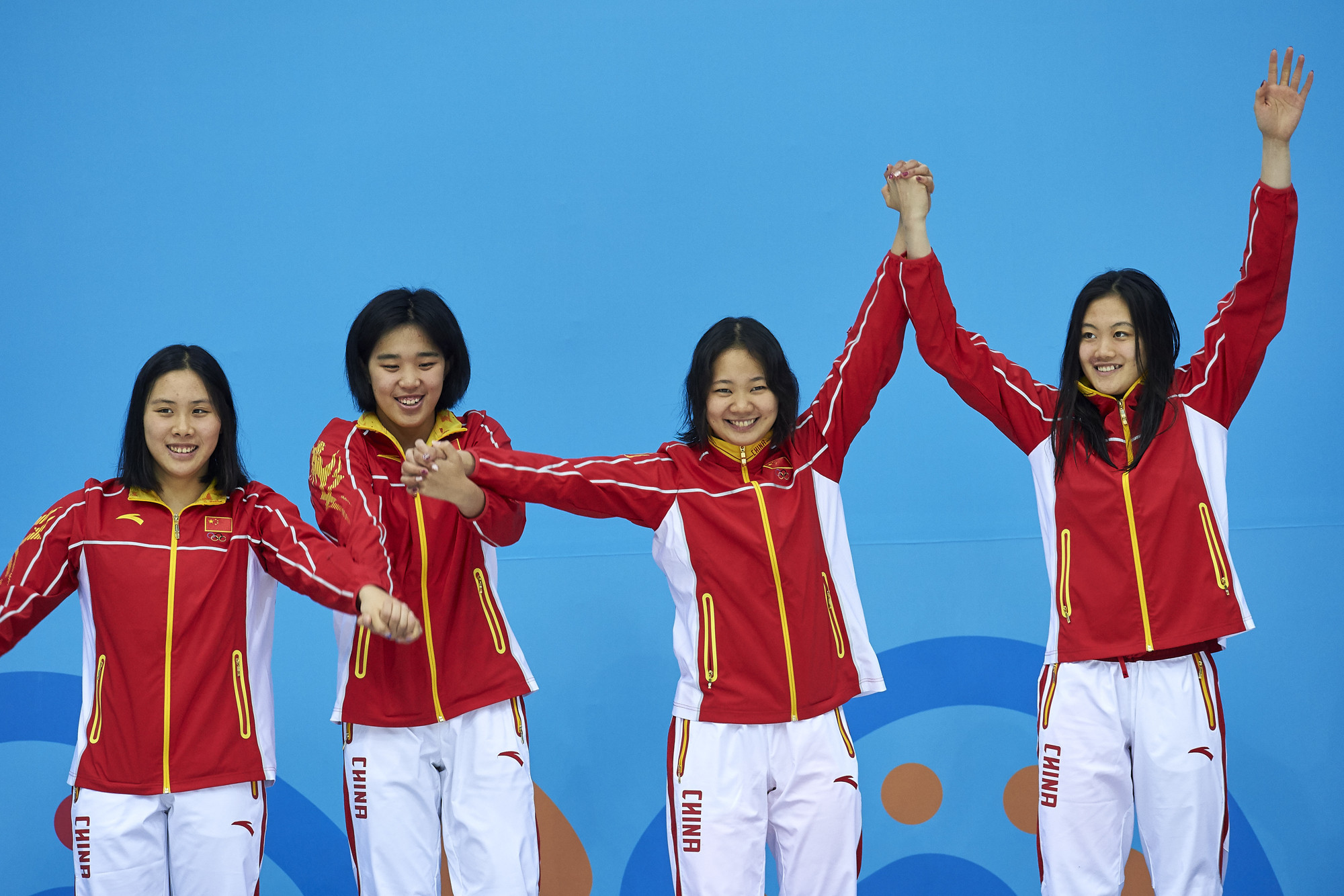 Chinese swimmers grabbed another seven medals today to continue their dominance in the short course swimming competition at the 2017 Asian Indoor and Martial Arts Games.

Their three golds all came with Games records and they also earned three silvers and a bronze to head into the final day with an unassailable lead in the medal standings.

Wang Peng set the tone at the Aquatics Centre when he broke an eight-year Games record in the morning heat of the men’s 50 metres butterfly before bettering it in the final, in which he clocked 22.80sec.

Sun Meichen followed up on Wang’s success by smashing the women’s 200m freestyle Games record with a time of 1 min 55.57sec.

Sun also swam the last leg in the women’s 4x50m freestyle relay in which her team won gold in a Games record time of 1:40.16.

South Korea’s Jeong Dongwon continued his winning streak today with his third gold medal in as many races after winning the men’s 100m backstroke in 51.28.

Hong Kong also had a good day in the pool, with veteran swimmer Au Hoi Shun Stephanie winning the women’s 100m backstroke in 58.94.

China claimed the two other medals with Yang Yifan second in 59.16 and Jiang Yuru third in 59.25.

There was also a Games record in the men’s 4x50m freestyle relay as Chinse Taipei prevailed in 1:28.08.

Other winners in the pool were Thailand’s Jenjira Srisa-Ard in the women’s 50m butterfly and Chinese Taipei’s An Ting-Yao in the men’s 200m freestyle.

China and Uzbekistan each won two gold medals on the first day of wrestling with men’s and women’s freestyle competitions taking centre stage at the Main Indoor Arena.

China’s Sun Yanan got the upper hand against Japan’s Miho Igarashi in the women’s freestyle under 48 kilograms final before being pinned by her opponent and conceding a point.

Igarashi was unable to equalise, though, with Sun winning gold at 2-1.

In the women’s freestyle under 69kg final, China’s Zhou Feng made light work of Kazakhstan’s Elmira Syzdykova, winning the gold medal on 9-0.

With the scores equal at 2-2, Shavkatov pinned his opponent to the mat to win 6-2.

In the men’s under 74kg final, Uzbekistan’s Bekzod Abdurakhmonov rolled Iran’s H. Elyasi Chamazkoti to clinch a 12-5 victory and the gold medal.

There was also one title each for India and Iran.

India’s Bajrang was scheduled to face Daichi Takatani of Japan in the men’s under 65kg final, but he was handed the gold medal due to an injury incurred by his opponent.

Another sport beginning today was sambo as Kazakhstan claimed four of the nine gold medals on offer at the Martial Arts Arena.

There were also victories for compatriots Aizhan Zhylkybayeva, Azhar Kenbeil and Zere Bektaskyzy in the women’s under 48kg, under 60kg and under 72kg categories respectively.

Uzbekistan’s gold medals were won in the men’s under 90kg category, thanks to Nemat Yokubov’s 7-5 win over Turkmenistan’s Ruslan Esgerow, and men’s under 68kg division, by virtue of Sarbon Ernazarov’s narrow victory at the expense of Turkmenistan’s Begmyrat Meredow.

The one other sambo gold medal went the way of Kyrgyzstan’s Beknazar Raiymkul Uulu, who clinched the men’s combat under 74kg crown with a 13-6 success over Kazakhstan’s Assylbek Smailov.

In weightlifting, Fiji’s Eileen Cikamatana set her sights on the Gold Coast 2018 Commonwealth Games after her winning run continued at Ashgabat 2017.

Cikamatana won gold in the women's 90kg, breaking her Oceania record for combined weight to add to the four titles she won earlier this month at the Commonwealth and Oceania Championships in Australia.

Her latest victory saw her lift 111kg in the snatch to take a 14kg lead into the clean and jerk in which she succeeded with 142kg for a total of 253kg at the Weightlifting Arena.

This beat the mark she set in Australia by 3kg.

Turkmenistan’s Aysoltan Toycyyewa won the silver medal with 118kg in the clean and jerk to finish with a total of 215kg.

In the men’s 105kg division, Uzbekistan’s Ivan Efremov was the only medal contender to complete all three attempts in the clean and jerk as he took gold.

Efremov had put pressure on his rivals with a 190kg effort in the snatch and his third lift of 221kg put him in prime position to secure the title.

His winning total was 411kg.

Iran’s Ali Hashemi put 231kg on the barbell in an attempt to overtake Efremov but he was unsuccessful and settled for silver with a 401kg total.

Iraq’s Salwan Alaifuri also failed with a last-lift attempt to claim top place and ended up with the bronze medal with 395kg.

Hashemi's attempt of 186 kg in the snatch provided a moment of concern as he was unable to steady himself and took two steps to the end of the platform.

He dropped the barbell which hit the platform edge and rolled towards a judge's table.

The judge fled as the weights hopped over a protective barrier before crushing the table.

In kickboxing, there was disappointment for Turkmenistan’s Maysa Gupbykowa as she missed out on the first gold medal of Ashgabat 2017.

Gupbykowa was beaten by Iran’s Shahnaz Mirheidari in the final of the women’s point, fighting under 55kg at the Muaythai Kickboxing Arena.

The sport’s only other final saw Kazakhstan’s Akerke Nauryzbayeva beat Iran’s Fatemeh Alizade in the women’s full contact under 56kg.

Hossein Vafaei Ayouri dedicated victory to his father after he was part of the men's snooker team trio that made history to claim Iran’s first gold medal in billiard sports at Ashgabat 2017.

Iran eased to an emphatic 3-0 win against Qatar with Vafaei Ayouri sinking the winning shot at the Billiard Sports Arena as he partnered Amir Sarkhosh in the doubles against Ali Nasser AL Obaidli and Ahmed Saif.

Vafaei Ayouri was introduced to snooker at the age six by his father Asghar, but he passed away nine years later and now everything is dedicated to his memory.

In bowling, China’s Zhang Yuhong and Zhang Chunli clinched the gold medal in the final frames against South Korea’s Baek Seungja and Hong Hae Ni in a thrilling end to the women's doubles final.

Hong spared a difficult split in the ninth frame, but it was just too late as victory was in the hands of the Chinese, who screamed in delight at the end of the game at the Bowling Centre.

The final round of the men’s standard individual chess event saw Vietnam’s Quang Liem Le take the gold medal on a tie-break.

China’s Lu Shanglei claimed the silver medal and a tie-break formula for bronze was needed to separate four players on five points at the Chess Arena.

The formula awarded the bronze medal to India’s Sasikiran Krishnan.

In the women’s event, the destination of the gold medal came down to micro-matches between China and Kazakhstan on the two top boards.

The draw meant a bronze medal for Saduakassova.

Top seed Lie Tingjie of China secured the silver medal at 5.5 points, 0.5 behind Tan, after marching to victory over Kazakhstan’s Zhansaya Abdumalik on board two.