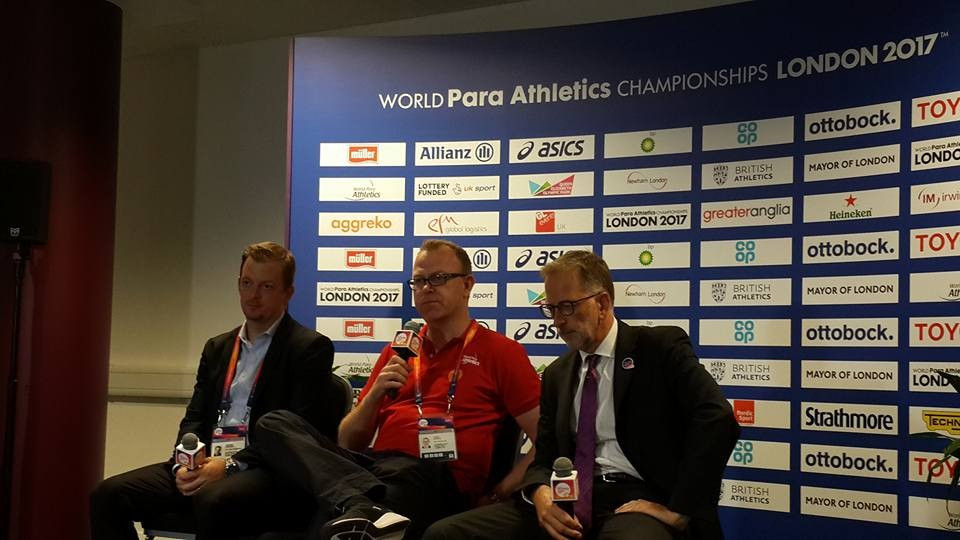 London 2017 co-chair Ed Warner has claimed the British Paralympic Association (BPA) and UK Athletics are both "extremely keen" for the city to bid for the 2019 World Para Athletics Championships.

Warner is hoping to hold discussions with City Hall, UK Sport, the Government and other interested parties and stakeholders about the potential for London to stage back-to-back editions of the biennial event.

The 2017 event is due to conclude here today and speaking at the closing press conference, Warner revealed the enthusiasm of both the BPA and the UK Athletics, of which he was formerly chairman, for the event to come back here in two years' time.

The deadline for bids is the beginning of September.

Warner is also chairman of the International Paralympic Committee (IPC) World Para Athletics Technical Committee, the group who will decide which city hosts the 2019 Championships.

"The BPA and UK Athletics are both extremely keen to bid and I think they’ll be making that clear, both of them, in the next 24 hours or so," he said.

"I’ve got really interested, enthusiastic responses from a number of the partners that we need to get behind that.

"For example, I’ve been talking to the Borough of Newham, they’re one of the co-shareholders in the [Olympic] Stadium.

"So the task from here is to make sure we can get the politicians locally and nationally over the line on this.

"And that’s a task for the next month."

Ask for an estimation on the cost of hosting the 2019 World Championships, Warner claimed "you get 50 of these for one Commonwealth Games".

He wants the Government to give less money to either Birmingham or Liverpool if they are awarded the 2022 Commonwealth Games in order to help fund the World Para Athletics Championships.

"Now, if I look at how much disability sport is embedded in the Commonwealth Games, where there are some showpiece events, but there isn't a full programme," said Warner.

"I would say that making a few small economies in that bid from Liverpool or Birmingham, backed by central Government could swallow up the cost of putting on this which gives all athletes from around the world a amazing opportunity to further their preparations for Tokyo [2020], but more importantly progress the movement for Para-athletics.

"So, it's on a different scale by that magnitude roughly and to my mind if we all step back and look at the benefits of doing it for London, for Newham, for the Paralympic Movement, for UK Athletics, I think you'll have to have a heart of ice not to do it."

Joining Warner at the press conference was IPC vice-president Andrew Parsons, who is one of four candidates vying to succeed Sir Philip Craven as President of the body.

The Brazilian believes London would have an advantage on its rivals if the city was to submit a bid.

"Sport is in our heart, but we do have other bids on the table and we do have to treat them with the same respect that we have for London," Parsons said.

"But London has raised the bar and the other ones bidding, they know they have to deliver what the people will be expecting, which is something like this (the 2017 World Championships) to happen.

"We will be handling all the different bids with the same perspective, but London now has a track record.

"There is a bid document, but I think London has an advantage because we know we have experience here and we have a lot of good support coming from many of the London partners."

Some athletes have even go so far to suggest that London should become the permanent home of the World Para Athletics Championships, but that is something which Parsons cannot envisage.

"From a personal point of view, I don’t see London as a permanent location," he added.

"One thing is to have it in 2019 but you cannot have a permanent location for World Championships, whether in Para athletics, whether in Para-swimming or any other sports that we are the governing body of."

IPC spokesman Craig Spence confirmed that 305,000 tickets were sold for the 2017 World Para Athletics Championships, just 10,000 less than what was sold for last year's Paralympic Games in Rio de Janeiro.

While the 56,000-capacity Olympic Stadium may have looked sparse at times, the World Championships will go down as the best attended outside of a Paralympics.

Sales total more than the amount sold for all eight of the previous championships combined.

Canadian wheelchair racer Brent Lakatos, who today became just one of three athletes to win four gold medals at these Championships, is among those who have given their backing to all future World Championships being held in London.

The 37-year-old, a triple silver medallist when the Paralympics were held in London in 2012, recently tweeted a message which read: "The UK is the birthplace of the Paralympics.

Lakatos has competed at five editions of the World Championships and disagrees with the argument that moving the event around the world will be more beneficial for the development of the sport.

"I actually think that that’s wrong," he told insidethegames.