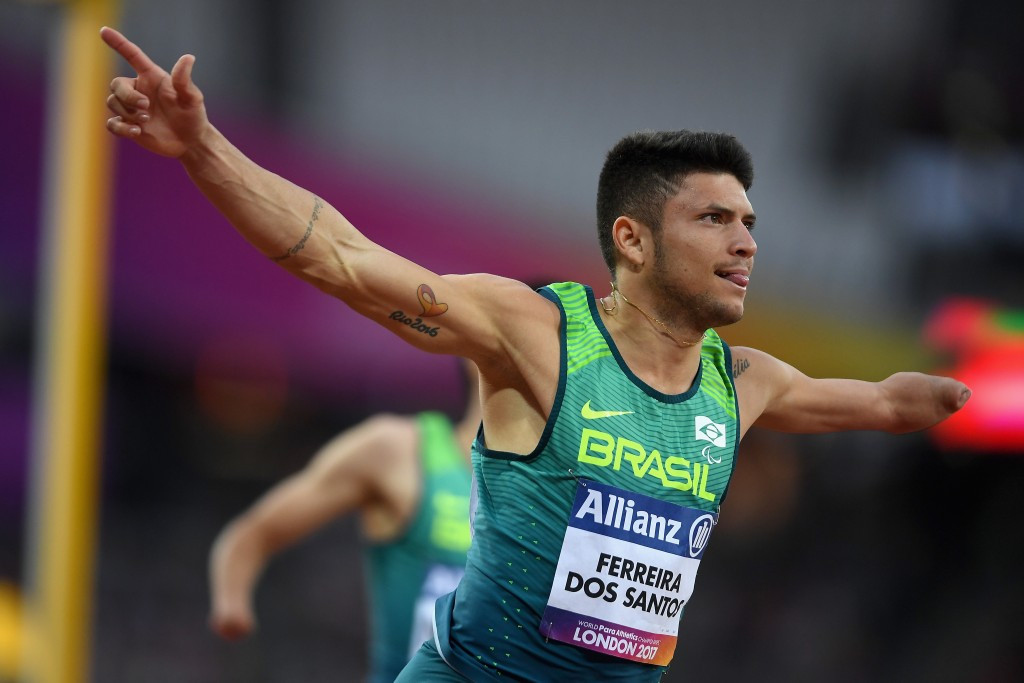 Brazil’s Petrucio Ferreira dos Santos smashed his own men’s 200 metres T47 world record to claim a second gold medal of the 2017 World Para Athletics Championships on what was a memorable evening for hosts Great Britain.

The 20-year-old, winner of the 100m title in a world record time last Saturday (July 15) before suffering the disappointment of disqualification from the 400m on Wednesday (July 19), clocked a time of 21.21sec.

"I was always focused and motivated for the 200m and what happened in the last two days only motivated me even more for my best effort in the 200m," Ferreira dos Santos said.

"I knew I was in good form, but I didn't know I could go that fast.

"Thanks to London for helping to fuel me a lot."

Rounding out the podium was Poland’s Michal Derus in 22.08.

Also breaking their own world record this evening was Britain’s Sophie Hahn.

It comes exactly a week after Hahn broke the 200m world record on her way to victory.

"I’ve been off for a week so waiting to get out here again has been difficult.

"I think this is the biggest run I’ve ever performed - it felt amazing and the crowd here really moved me along."

Fellow Briton Kadeena Cox was a distant second in 13.07 and Germany’s Lindy Ave came third in a personal best 13.16.

Another world record came Britain’s way in the men’s shot put F42 as Paralympic gold medallist and two-time defending world champion Aled Davies obliterated his own previous best mark of 16.13 metres, set in American city Tempe in May 2016, with a throw of 17.52m.

There was more British success in the women’s 100m T37 which saw Georgina Hermitage triumph in a Championship record time of 13.36.

The 23-year-old, whose best-placed finish in major competition up to now had been third at the 2013 World Championships inLyon, went into the lead with his third-round effort of 51.05m.

But it was his final-round throw of 52.96m that really impressed, adding 58 centimetres on to the previous world record mark set by Iran’s Mohammad Naeiminia in Tehran in May.

Greece’s Michail Seitis and South Africa’s Arnu Fourie were given same time of 22.53, but it was the former who took the silver medal.

Ireland’s Michael McKillop made it double gold at these World Championships after adding the men’s 1500m T37 title to the 800m T38 crown he won on Sunday (July 16).

The four-time Paralympic gold medallist posted a time of 4min 36.38sec to finish ahead of Canada’s Liam Stanley, the runner-up in 4:37.96, and Algeria’s Madjid Djemai, the bronze medallist in 4:41.93.

The order of the podium was the same as that from Rio 2016.

The men’s 800m T13 final was an extremely close contest with Fouad Baka beating twin brother Abdellatif to the gold medal in a reverse of the 1500m event on Wednesday.

Fouad achieved a Championship record time of 1:51.60, beating his sibling by 0.09 seconds.

Cuba’s Luis Felipe Gutiérrez broke the Championship record three times on his way to the gold medal in the men’s long jump T13.

Bulgaria’s Radoslav Zlatanov jumped a personal best 6.88m for the silver medal ad bronze went to high jump champion Isaac Jean-Paul of the US with 6.84m.

There was also a Championship record for America's Sam Grewe, who won the men’s high jump T42 with a mark of 1.86m.

He was followed in the standings by Indians Sharad Kumar, who registered a personal best 1.84m, and Varun Singh Bhati, with 1.77m.

Another athlete in Championship record-breaking form was Rio 2016 silver medallist Deon Kenzie of Australia with a time of 4:06.68 in the men’s 1500m T38.

Mexico’s Salvador Hernandez Mondragon was the runner-up in 17.28, followed by Martin’s countryman Gianfranco Iannotta in 17.54.

Germany’s Johannes Floors added the men's 200m T43 title to the 400m crown he won on Monday (July 17) with a Championship record of 21.50 in the last event of the evening.

Among the other winners in the field were Poland’s Maciej Lepiato in the men’s high jump T44 with 2.14m and China’s Wang Yanzhang in the men’s discus throw F34 with 37.16m.

Paralympic champion Asmahane Boudjadar of Algeria set an African record of 5.92m to take the gold medal in the women’s shot put F33 and Iran’s Saman Pakbaz reached the top of the podium in the men’s shot put F12 with a season’s best 15.82m.

A distance of 4.73m was enough for Bahrain’s Fatema Nedham to come away with the women’s shot put F53 title.

After nine days of competition, China lead the medal table with 25 golds, 16 silvers and 16 bronzes.

America are second with 19 golds, 17 silvers and 17 bronzes and are followed by Britain in third with 17 golds, five silvers and 13 bronzes.