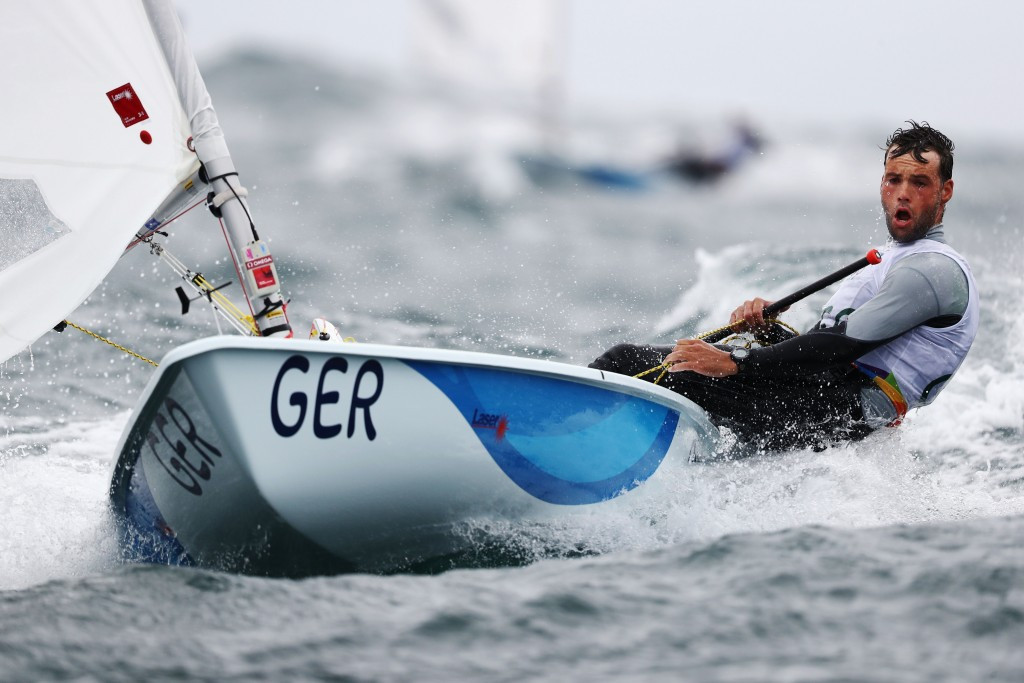 Germany's Philipp Buhl enjoyed a consistent day of racing as he moved up to third in the men's laser event at the Sailing World Cup Final on Santander Bay.

Buhl grabbed a third and a fifth to move up into contention on day two of racing.

The laser fleet in Santander is strong with two-time world champion Nick Thompson of Great Britain and Olympic medallists Tonci Stipanovic of Croatia and Cyprus' Pavlos Kontides among the field.

France's Jean Baptiste Bernaz managed to hold on to his overnight lead after he picked up his second race win of the week and a third.

Buhl was pleased with his efforts, however.

"It was a really nice day," said Buhl.

"My results are good and the conditions are perfect.

"I cannot remember a time when I've ever come back with a big smile like today, lots of sunshine and waves made it perfect.

"Races like today are always hard because you must hike and everything is quite exhausting.

"There are a few leading guys here and you must stick and fight for the metres to come first, second or third."

Belgium's Evi van Acker and Anne-Marie Rindom of Denmark enjoyed emphatic performances in the women's laser radial today as they shared the top two places in both races.

Rindom won the opening contest with van Acker following behind.

The positions were reversed in the following race and the pair have moved to the top of the leader board as a result.

Spain's Fernando Echavarri and Tara Pacheco were on form in the Nacra 17, winning two races and claiming a second place.

They dominated the first two races and were unlucky not to claim a third victory.

Defending World Cup champion Oliver Bridge of Britain found his form on the second day of competition in kiteboarding, winning five out of six races in the formula kite to leap into the podium positions.

Sitting in third, he is two points off brother Guy.

Nico Parlier of France maintained his excellent form and snapped up five wins in the yellow fleet to extend his lead.

Mills, who has been sailing in the 49erFX recently, has made a temporary switch back to the 470 and had no trouble readjusting.

The British pair claimed a pair of victories and lead Afrodite Zegers and Anneloes van Veen of The Netherlands, unbeaten so far in 2017.

Olympic bronze medallists Panagiotis Mantis and Pavlos Kagialis of Greece were dominant in the men's fleet, winning both of their races.

They moved into first overall and have put five points between themselves and David Bargehr and Lukas Mahr of Austria, who are second.

A pair of second place finishes was enough for Great Britain's Ed Wright to grab the lead in the Finn.

Anders Pedersen of Norway won the opening race of the day but occupies seventh place.

In the men's and women's RS:X, two sailors in both fleets dominated the day.

Dutch star Kiran Badloe swept the field aside in the men's division, winning every single race to grab the overall lead, two points ahead of Israel's Shahar Zubari.

Patricia Freitas of Brazil, meanwhile, claimed a pair of wins and a third in the women's fleet.

Her advantage stands at six points over China's Yunxiu Lu, winner of the American World Cup.

The Polish pairing of Lukasz Przybytek and Pawel Kolodzinski held onto their advantage in the men's 49er.

A steady string of races gives them a one point advantage over British duo James Peters and Fynn Sterritt.

Their countrymen Dylan Fletcher and Stu Bithell were the standout racers in the 49er, however, grabbing a pair of race wins and a third to move into third spot overall, within sight of the leaders.

There is still very little separation in the women's 49erFX, with eight points splitting the top six.

Charlotte Dobson and Saskia Tidey of Great Britain find themselves in pole position though following a first, second and third today.

Racing is due to resume tomorrow.