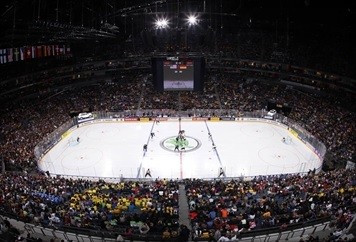 Last month's International Ice Hockey Federation (IIHF) Men's World Championship attracted the second-highest overall attendance in the history of the tournament, it has been revealed.

According to the IIHF, a total of 686,391 spectators came to watch the 64 games across the two venues - Cologne's Lanxess Arena and the AccorHotels Arena in Paris.

Only the 2015 edition of the World Championship, held in Prague and Ostrava in the Czech Republic, bettered the attendance of the 2017 competition, with around 741,700 fans attending matches there.

The IIHF said 10 games at the recent tournament in Germany and France, won by Sweden after they beat Canada in the final, were completely sold out.

Figures from the governing body also show another 22 were filled to 75 per cent capacity.

"This is all the more remarkable as both venues together offered the largest ever capacity for two venues at IIHF Ice Hockey World Championships (Cologne 18,500, Paris 14,500)," the IIHF said.

The sport's worldwide governing body also hailed the attendance on May 13, the middle day of the competition, where 55,239 spectators saw the three games in Cologne.

The IIHF claimed this had "not been seen yet on one single game day at IIHF Ice Hockey World Championships in the modern times of organising the event indoors only".