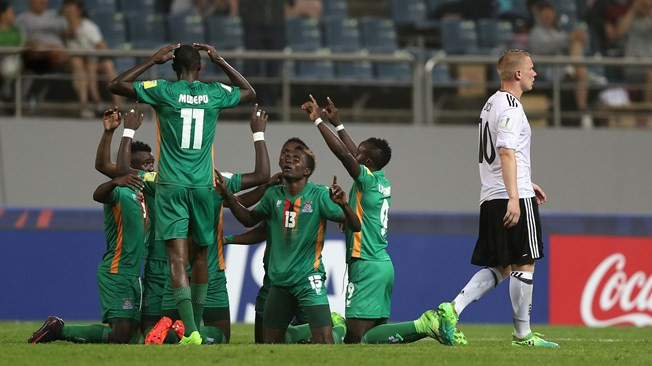 Shemmy Mayembe's extra-time winner sent Zambia through to the quarter-finals of the FIFA Under-20 World Cup for the first time as they stunned Germany 4-3 in a thrilling encounter at the Jeju World Cup Stadium.

The African nation looked to have had the pulsating match sewn up when Enock Mwepu's strike in the 86th minute gave them a 3-1 lead.

But Germany launched an incredible comeback and scored twice in the dying stages, through Suat Serdar's near-post flick and Jonas Arweiler, to send the contest into extra-time.

Following a breathtaking 90 minutes, the additional period proved to be a cagey affair until Mayembe found the net with 13 minutes remaining.

Germany were unable to find an equaliser as Zambia held on for a memorable triumph, sparking wild scenes of celebration from the players and coaching staff.

Philipp Ochs' free-kick had put the European nation in front before Emmanuel Banda volleyed home from close range to restore parity for Zambia.

Fashion Sakala then edged Zambia in front and Mwepu's goal four minutes from time gave them one foot in the last eight.

Serdar and Arweiler had other ideas, however, although their late rescue act proved to be in vain thanks to Mayembe's goal in extra-time.

Zambia will face either France or Italy in their first Under-20 World Cup quarter-final.

Elsewhere, Uruguay secured their spot in the last eight with a narrow 1-0 victory over Saudi Arabia at the Suwon World Cup stadium.

Nicolas de la Cruz scored the game's solitary goal from the penalty spot five minutes after the break following a handball in the area.

The South American nation will take on Portugal, who beat hosts South Korea yesterday, in the quarter-finals.

Uruguay were joined in progressing to the next round of the competition by England, who overcame Costa Rica 2-1 at the Jeonju World Cup Stadium thanks to a brace from Ademola Lookman.

The England forward, who plays his club football for Premier League side Everton, converted Jonjoe Kenny's low cross after 35 minutes to put his side in front.

Lookman then bagged his second of the match in the second half as he calmly slotted home from close range.

Randall Leal scored a consolation goal with a minute left on the clock as he followed up his own spot-kick, which had been saved by England goalkeeper Freddie Woodman.

England will take on the winner of the match between Mexico and Senegal in the last eight.