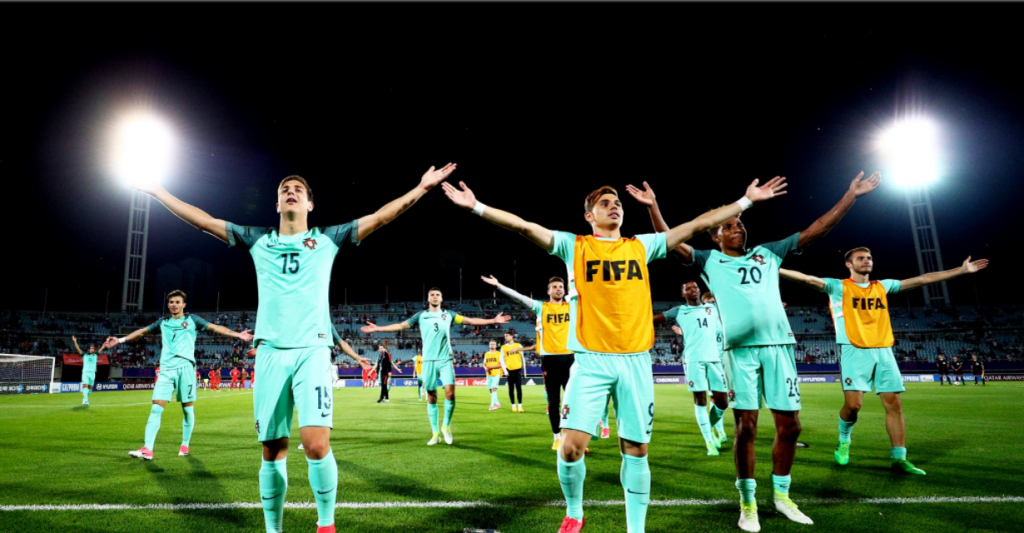 Two-time winners Portugal are through to the quarter-finals of the FIFA Under-20 World Cup after beating hosts South Korea 3-1 at the Cheonan Sports Complex today.

Xadas put the Portuguese ahead in the 10th minute and their lead was doubled shortly before the half-hour mark as Bruno Costa got his name on the scoresheet.

The game was effectively over as a contest in the 69th minute when Xadas worked his way through South Korea’s defence before placing a shot into the bottom corner.

Substitute Lee Sangheon pulled a goal back in the 81st minute to give the home nation a glimmer of hope, but it proved to be nothing more than a consolation.

Awaiting Portugal in the quarter-finals is the winner of the match between Uruguay and Saudi Arabia, which is scheduled to take place tomorrow at the Suwon World Cup Stadium.

Also through to the last eight are Venezuela, who beat Japan 1-0 after extra time at the Daejeon World Cup Stadium thanks to captain Yangel Herrera’s goal.

Herrera headed beyond Japan goalkeeper Ryosuke Kojima in the 108th minute to earn Venezuela a place in their first-ever quarter-final in the competition.

Adalberto Penaranda, Yeferson Soteldo and Ronaldo Pena all went close for Venezuela in the opening 20 minutes, while Japan nearly broke the deadlock before half-time through Ritsu Doan’s free-kick that hit the crossbar and a narrowly off-target Akito Takagi strike.

Japan continued to press in the second-half with Koji Miyoshi firing straight at onrushing goalkeeper Wuilker Farinez after being released by Doan.

However, Venezuela fought back and although Herrera’s free header went just wide of the mark in normal time, he made no mistake in the additional period.

Next up for Venezuela is a meeting with the winner of the match between the United States and New Zealand, which is set to take place at the Incheon Stadium on Thursday (June 1).

Both Portugal and Venezuela’s quarter-finals are scheduled for Sunday (June 4).