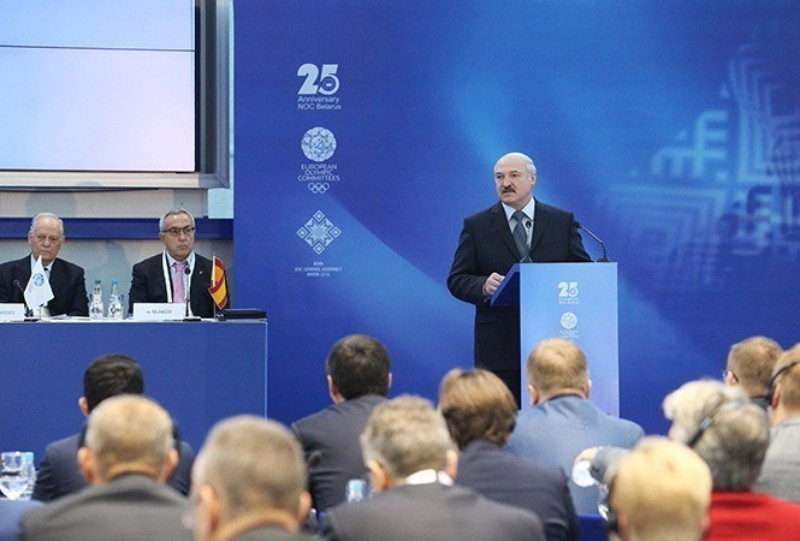 Human rights groups have called on the European Olympic Committees (EOCs) to use their leverage to press the Belorussian Government to improve standards in the country in the build-up to the 2019 European Games in Minsk.

In a letter sent to interim EOC President Janez Kocijančič, the Sports and Rights Alliance claim that Belarus "fails to meet basic human rights standards including on the right to protest, discrimination, press freedom and workers’ rights".

"Concrete measures" should be taken by the EOC in conjunction with the Belarus Government to address these "abuses", they urge.

"The European Olympic Committees have not yet spoken out on human rights, media freedom, labour standards, children’s rights, and anti-corruption," said Sylvia Schenk of Transparency International Germany, one of the organisations involved in the Alliance.

"We call on the EOCs to do so, without delay."

Human rights issues were also a major challenge ahead of the inaugural European Games in Baku in Azerbaijan.

The continental body, currently being led by Kocijančič following the "temporary self-suspension" of Patrick Hickey amid an ongoing ticketing investigation in Brazil, did speak out about human rights issues soon after awarding the Games to Belarus' capital city in October.

"The EOC will begin planning of the 2019 European Games with the respective authorities in Minsk over the next few weeks," a spokesman told insidethegames then.

"The Host City Contract will have clauses to this effect.

"However, as in any international sports event, the visiting international media will also be expected to respect the laws and regulations of the host nation.

“The 2019 European Games presents Belarus with a unique opportunity to present itself to the world and we look forward to helping them do so."

But the Sports and Rights Alliance have called for far more wide-ranging measures.

This includes "carrying out 'human rights impact assessments' including on labour standards and corruption due diligence, in consultation with potentially affected groups, including children, and other stakeholders and experts as well as independent human rights institutions and bodies".

Another call is for the introduction of a "clear stipulation in all contracts with commercial partners that they must respect human rights, labour standards, and anti-corruption throughout their supply chain".

A third call relates to "accepting independent outside monitors to receive and act on complaints of human rights abuses, labour standards violations, and incidents of corruption linked to Games".

A series of laws limiting the activity of opposition activists at major sporting events must also be overturned, the Alliance adds.

"After the human rights debacle that ensued when Azerbaijan hosted the 2015 Baku Games, the EOC need to put in place safeguards to ensure the Minsk Games are not a replay of the rights abuses that have characterised so many recent mega-sporting events," said Minky Worden, director of global initiatives at Human Rights Watch.

He was denied a visa by Britain to attend the 2012 Olympic Games in London.

Lukashenko, who was honoured by the EOC in 2008 "for his outstanding contribution to the Olympic Movement", is also President of the National Olympic Committee of the Republic of Belarus.

insidethegames has contacted the EOC for a reaction to the latest letter.