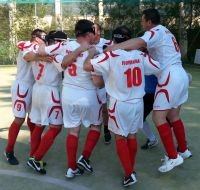 Bacău in Romania has been named as host of the qualifying tournament for the 2017 International Blind Football Federation (IBSA) Blind Football European Championships.

The winners and runners-up at the event, which is scheduled to take place from April 1 to 9, will earn the right to compete at the Championships in Berlin from August 17 to 27.

All IBSA member countries in Europe are able to participate, with the exception of Belgium, France, Germany, Great Britain, Italy, Russia, Spain and Turkey, who have already qualified as the top eight from the 2015 European Championships in Hereford in England.

The tournament will be known as the IBSA Blind Football European Championships Division Two and will be the first of its kind to be held.

It will also be the first time an official IBSA Blind Football competition has taken place in Romania.

Although Russia have qualified for the 2017 European Championships, they are currently banned from entering events or competitions sanctioned by the International Paralympic Committee (IPC).

The IPC suspended the Russian Paralympic Committee in August over allegations the country operated a state-sponsored doping programme at Sochi 2014.