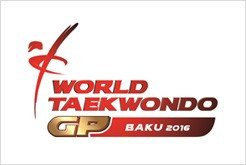 The World Taekwondo Federation (WTF) Grand Prix final will begin in Azerbaijan's capital Baku tomorrow, with a number of Olympic champions in action as the season draws to a close.

The event invites the 128 top Olympic-ranked athletes, fighting in four female and four male weight categories, to earn ranking points in advance of the 2017 fighting season.

A host of Olympic medal winners will be in action, with local eyes set to be on Radik Isaev, Azerbaijan’s Rio 2016 gold medallist in the men’s heavyweight category.

Competition begins tomorrow with the men's under-80 kilogram and under-58kg competitions, as well as the women's under-49kg and under 67kg divisions.

The second day of the event then includes the men's under-68kg and over-80kg categories, while the women will be compete in under-57kg and over-67kg competitions.

Their only two golds were won in women's competition and both of their Olympic champions are in action tomorrow.

Kim So-Hui is involved in the under-49kg competition while her compatriot, Oh Hye-ri, will be looking to add a Grand Prix title in the under-67kg division.

"This year’s Grand Prix Final, it is set to be an excellent event with the world’s top 16 taekwondo athletes per weight division expected to compete; including the Olympic champions and world champions," said WTF President Chungwon Choue.

"It will be an important event to celebrate our sport in the Rio 2016 Olympic Games."

The Grand Prix final is just one part of a busy week for the WTF in Baku.

The event, now in its third year, will reward the best players, best kick, best referees, best coach and best member national association of the year, as chosen by their peers in on-site voting.

Between December 12 and 13, the World Taekwondo Team Championships will then take place, also at the Sarhadchi Olympic Sports Complex.

Eight national teams per gender division will be competing for honours.

For the first time, mixed-gender teams will take to the field of play in an inaugural event, thus giving the Championships three winning teams - one female, one male and one mixed.

"Also, I expect that the World Taekwondo Team Championships will serve as an opportunity for the top elite teams to display their skills and togetherness," added Choue.

"It will show you the thrilling moments of competition and friendship."