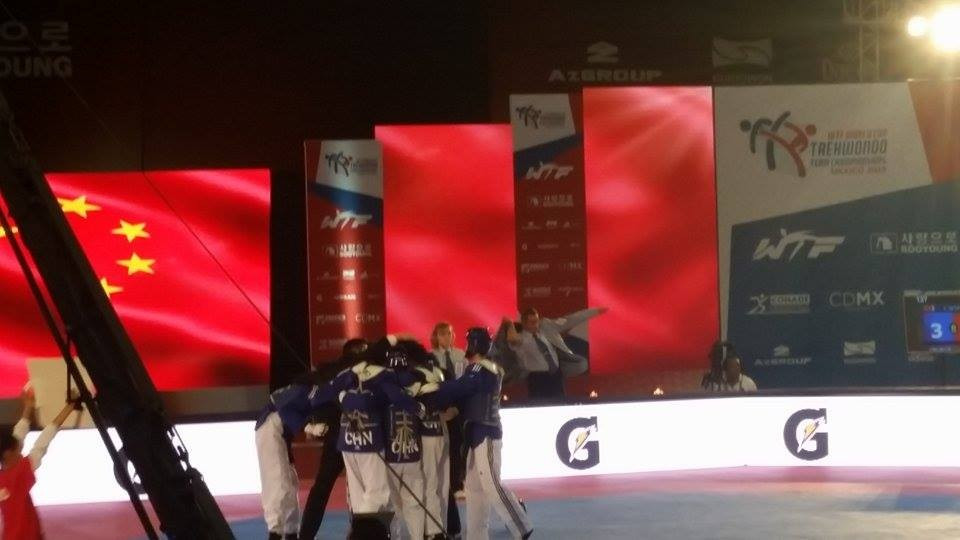 The Chinese triumped after being pushed all the way in a thrilling final duel with hosts Mexico.

It marked the third time Mexico have been seconds from gold here over the last week following near misses suffered by Maria Espinoza and Saúl Gutiérrez in their respective WTF Grand Prix Finals gold medal matches.

Once again, it was a case of so near yet so far for the gallant host country, reinforcing their plucky losers tag with a tenacious fighting display.

In a format which lends itselt to more dynamic, attack-orientated play, squads consist of either four or five players, with a maximum combined weight of 442 kilograms for men and 376kg for women.

Fighters are matched up by pre-set number in the first round, but in the second and third substitutions can be made by the coaches at any time.

Led off by WTF Female Athlete of the Year, Wu Jingyu, China took the lead from the outset and always appeared tactically more astute than their opponents, keeping them at at a distance before utilising impressive leg-reach to counter with devastating effect.

They led 6-2 at the end of the first round and 21-15 after the second, before a fightback led by Espinoza and France's Haby Niare, fighting for Mexico as each squad was allowed one "overseas player".

A fabulous spinning kick from Espinoza levelled the scores at 26-26 before Niare briefly put her adopted team 30-29 ahead.

China immediately hit back before moving one ahead with six seconds left before Niare struck for another point as shouts of "Mexico Mexico" reverberated around the arena.

Led by the outstanding Shuying Zheng and Hua Zheng, the Chinese bided their time and narrowly avoided several spinning kicks before striking with three individuals scores for a 3-1 win.

There were no bronze medal matches, meaning losing semi-finallists Taiwan and South Korea shared the final spot on the podium.

It was always going to be hard for the men's final to live up to the standard of the female affair due to the absence of Mexico, with Iran instead taking on neighbouring Azerbaijan.

Iran's strength in depth to reach the final without most of their established stars was impressive, but once there they proved unable to match the relentless precision and composure of their opponents.

After a close opening, Azerbaijan led 8-6 after the first round and ruthlessly pressed ahead thereafter.

They eventually prevailed 42-23 as the Iranians resorted to desperate spinning kicks in a fruitless attempt to close the gap.

South Korea and Russia shared the bronze medal as a season-ending week of top quality taekwondo was declared closed here.