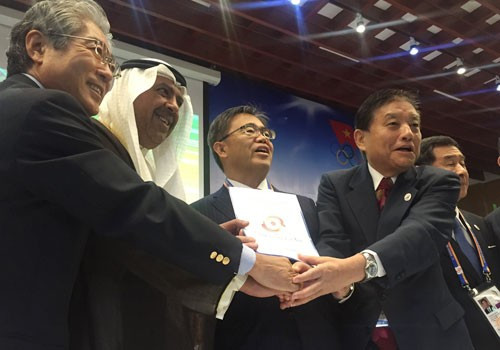 Nagoya and Aichi in Japan were officially awarded the 2026 Asian Games at today's Olympic Council of Asia (OCA) General Assembly after a presentation which included a rendition of an Elvis Presley classic.

A signing ceremony took place between OCA President Sheikh Ahmad Al-Fahad Al-Sabah and the respective heads of Aichi's Prefectural Government and the City of Nagoya, Hideaki Ohmura and Takashi Kawamura.

Japan were the only bidder for the event.

It will mark the third time the Asian Games has been held in Japan following Tokyo in 1958 and Hiroshima in 1994.

Both locations were hailed as sporting capitals of Japan during today's presentation in which a local economy based on automobile and aviation industries was highlighted.

Ohmura claimed their Games will seek to "optimise existing facilities", "use cutting edge technologies", embrace "warm local hospitality" and focus on the "promotion of local sports".

Venues are expected to include the Mizuho Athletic Stadium, which will be revamped to a capacity of 35,000 in time to host athletics and both Opening and Closing Ceremonies in 2026.

Gymnastics and aquatics should be held at the Nagoya Civic General Gymnasium and adjacent pool.

Baseball will take place at the iconic Nagoya Dome while the Toyota Stadium will host football matches.

"Our strong economy and outstanding hospitality from the local population will ensure a successful Asian Games," Ohmura concluded.

He was then joined on stage by Kawamura, who spoke repeatedly on how Nagoya is still continuing its recovery from partial distruction during World War Two before breaking into song.

He sung an adapted version of Presley's 1961 hit Can't Help Falling In Love ending with the line, "Would it be a sin...if Nagoya and Aichi host the 2026 Asian Games".

It provoked the loudest round of applause of the day, with the Mayor's flicked-back hair style even adding to the Elvis-impression.

The duo were then joined by Japanese Olympic Committee President Tsunekazu Takeda for the signing ceremony.

Japan is also due to host the 2017 Asian Winter Games in Sapporo.

It is also scheduled to stage the 2019 Rugby World Cup, giving it an unprecedented portfolio of events.

"I'm very happy that another big event has been awarded to Japan," Takeda told insidethegames.

"I am convinced that it will be a big success.

"It is very good situation at the moment that Japan has been awarded so many events."

The 2018 Asian Games are due to take place in Jakarta and Palembang and the 2022 edition in Hangzhou in China.