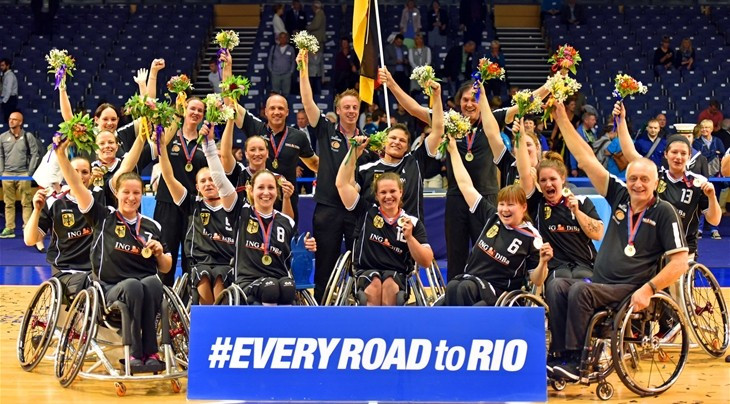 Reigning women’s Paralympic champions Germany will begin their Rio 2016 campaign with a match against the host country Brazil after the official match schedules were announced.

Both teams are scheduled to meet in the Rio Olympic Arena, which is hosting wheelchair basketball competitions at the Games, along with the Olympic Training Centre.

They will both be forced to wait for the second day of competition to play their first match, as their opening fixture is due to take place on September 9.

World champions Canada will take on Britain elsewhere in Group A, with the tie scheduled to take place on the opening day of action.

As the fifth team in the group, Argentina will wait until the second day to begin competition.

Algeria and China will meet in Group B, with France and the United States also set to clash, leaving the Netherlands sitting out of the first round of ties.

In the men’s competition, Paralympic champions Canada will open their campaign to claim another gold medal against Spain in Group A.

World champions Australia also feature in the group and will begin with a tie against the Netherlands, while Turkey and Japan will meet.

Hosts Brazil open Group B will a match against the United States, with European champions Britain taking on Algeria and Iran will meet Germany.

"The schedule takes a lot of time and accuracy in piecing it together to ensure equality for all teams with times and dates as well as taking in consideration the demands from a number of different broadcasters,” said Ulf Mehrens, International Wheelchair Basketball Federation (IWBF) President.

“We are confident that this schedule will offer everyone an exciting showcase of the sport.

“The announcement of the schedule continues to generate excitement around the games and now fans of the sport will be able to purchase tickets to support their country."

The competition scheduled was drawn up and agreed by the IWBF, Rio 2016, Olympic Broadcast Services (OBS) and the International Paralympic Committee (IPC).

Britain will have the honour of opening both the men’s and women’s competitions, with the ties against Algeria and Canada being the first held at the Rio Olympic Arena.

The top four teams in each of the men's and women's groups will go through to the quarter-finals.

Both the women’s gold and bronze medal matches are due to take place on September 16, with the men’s taking place the following day.

The full schedule can be viewed by clicking here.