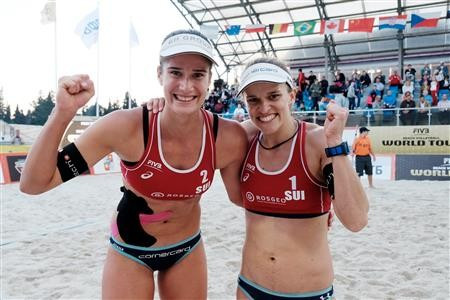 The fourth seeds defeated Elsa Baquerizo and Liliana Fernandez, who had previously won all six of their games at the competition, 21-11, 19-21, 15-17 at the Russian Black Sea venue.

Top seeds Karla Borger and Britta Büthe were among the Spaniards' victims in the quarter-finals but they have now lost twice in a row against the Swiss team, after previously winning the first four meetings between the duos.

Quick starts in the two sets to go Heidrich and Zumkehr's way proved key as they opened up a 7-1 lead in the opener and a 6-1 advantage in the decider.

The Swiss had also won all of their matches up until the showpiece game.

“The Spanish girls were on fire, especially with their semi-final win Saturday over the Italian girls," said Zumkehr as her team won their second FIVB World Tour gold medal in 36 starts.

“We also had a streak of six wins entering the finale with big victories over teams from China, Argentina and Germany.

“The quick starts in both sets were crucial.

“With a big lead, the key is just siding out and we did that to win.”

The men's title went to Italy's Daniele Lupo and Paolo Nicoali, who disappointed the home crowd by seeing off Russia's Konstantin Semenov and Viacheslav Krasilnikov 21-15, 21-18.

The next FIVB World Tour event, the Antalya Open in Turkey, begins on Tuesday (May 10).