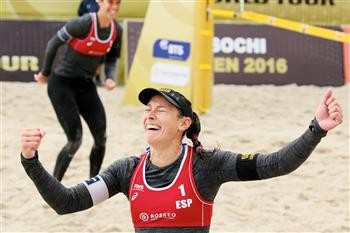 Defending champions Marta Menegatti and Viktoria Orsi Toth were knocked out in the semi-finals of the International Volleyball Federation (FIVB) Sochi Open today.

The Italians, the third seeds, were beaten by Spain's Elsa Baquerizo and Liliana Fernandez in the last four of the World Tour event.

Baquerizo and Fernandez, the sixth seeds, triumphed 21-19, 21-19 to reach tomorrow's final at the Russian venue.

They will meet Switzerland's Joana Heidrich and Nadine Zumkehr who came through their last four clash against Germans Katrin Holtwick and Ilka Semmler at the Black Sea resort.

"We are thrilled to be in another FIVB finale,” said 31-year old Zumkehr.

“We made some big plays at the end of each set to win the match, especially with Joana’s blocking.

"The Germans are a tough team to play because of their experience.

"We have played them a lot with them winning most of the time, but have defeated them twice this year in three meetings.”

Heidrich and Zumkehr had booked their place in the last four by beating fifth-seeded Ana Gallay and Georgina Klug of Argentina 16-21, 21-14, 22-20 in the quarter-finals earlier in the day.

In the men's final there will be home interest after Russia's KonstantinSemenov and Viacheslav Krasilnikov beat Alex Ranghieri and Adrian Carambula of Italy, 21-19, 21-17.

They will meet another Italian pair in Daniele Lupo and Paolo Nicoali, 21-17, 21-13 winners over Americans Tri Bourne and John Hyden.