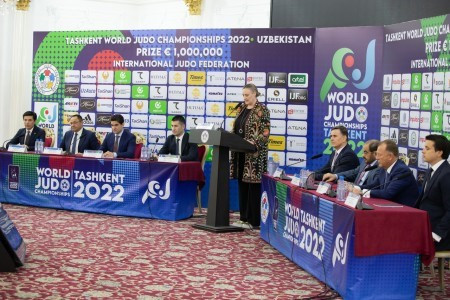 The pair both became individual Olympic champions on the same day on home soil last year and are both seeking a third world title in Uzbekistan's capital with competition scheduled to run from tomorrow until October 13.

Uta goes into the women's under-52-kilograms division, potentially one of the most competitive, which could feature a rematch of the Olympic final against Amandine Buchard of France in the semi-final.

A rare possibility could await in the decider following Kosovan Distria Krasniqi's decision to move up a weight class from the under-48kg, in which she also won gold at the postponed Games in Japan.

In the men's under-66kg tournament, Hifumi Abe and defending champion Maruyama Joshiro have been drawn on other sides of the bracket meaning an all-Japanese clash in the final is on the cards.

The pair have previous history after eventual gold medallist Maruyama defeated his compatriot in the 2019 semi-finals but missed out on an Olympic spot a few months later after losing on golden score in a remarkable 24-minute bout.

Although Abe goes into the competition as fourth favourite and Maruyama is left unseeded, the former will know better than to write off his rival early if they are to meet.

Japan's star-studded team is expected to defend their overall title from the 2021 edition in Budapest where they won six gold, four silver and two bronze medals.

France came the closest, but a single gold and two silvers meant they were far from touching distance.

They are among 571 athletes from 82 countries due to take to the tatami in Tashkent's Humo Arena.

Although the city has never hosted the IJF's flagship event, it has been a regular host on the World Tour since 2013, held seven consecutive Grand Prix events from 2013 to 2019 and staged a Grand Slam last year.

Athletes can earn up to 2,000 ranking points towards qualification for the Paris 2024 Olympic Games if they win a world title over the next week.

It represents the maximum number of points available in a judo event aside from the Games themselves.