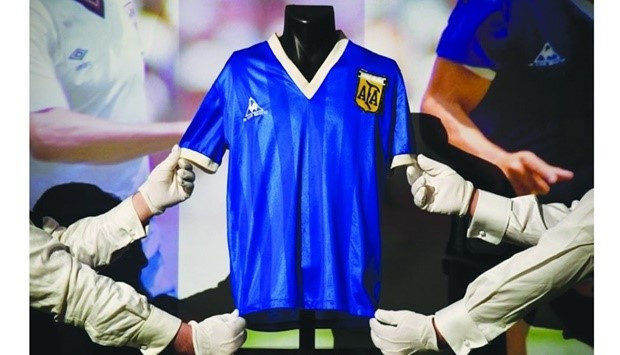 Diego Maradona's shirt that sold for a record amount at an auction earlier this year has gone on display in Qatar as part of a special exhibition to coincide with the country hosting the FIFA World Cup.

The shirt, worn by the Argentinean footballer during the quarter-final of the 1986 FIFA World Cup, when he scored his famous "Hand of God" goal against England, sold at an auction held by Sotheby's in London in May for £8.14 million ($9.17 million/€9.35 million).

Former England international Steve Hodge put the shirt up for sale after acquiring it at the full-time whistle of the match at the Estadio Azteca in Mexico City, which Argentina won 2-1 thanks to two goals from Maradona.

It has now been loaned by the secret buyer to the 3-2-1 Qatar Olympic and Sports Museum and is due to stay on display until April 1.

Sheikha Al Mayassa bint Hamad bin Khalifa al-Thani, the chairperson of Qatar Museums, said she was "excited" to have secured the shirt for a special World Cup exhibition.

"The jersey has been through quite a journey," she told Agence France-Presse.

"Starting with the moment when Nottingham Forest midfielder Steve Hodge swapped jerseys with Maradona after the match, in what now seems an inspired move."

The Maradona shirt is on display in Doha at the "World of Football" exhibition along with a ball used in the first World Cup finals in 1930, the first written account of the laws of football, one of only two bronze busts ever made of the iconic Brazilian Pele's right foot and other jerseys worn by football greats.

"Many of the items displayed at the 3-2-1 Qatar Olympic and Sports Museum are like this: symbols of human passion that have long, moving narratives behind them," said Sheikha Al Mayassa.

"These objects have now taken on a life of their own as part of the world's culture - inspiring emotion, evoking memories and sparking dialogue."

At the time, the figure paid for Maradona's shirt was a world record for a piece of sports memorabilia.

The sale of the shirt beat the mark of $8.8 million (£7.8 million/€8.9 million) for a historic manuscript in which Baron Pierre de Coubertin laid out plans to revive the Olympic Games.

The manuscript was purchased for that amount by Alisher Usmanov, the Uzbek-Russian billionaire who was President of the International Fencing Federation until stepping aside after being hit with sanctions related to the invasion of Ukraine.

A new record for a sports shirt has since been set by a Chicago Bulls jersey worn by Michael Jordan during the 1998 National Basketball Association (NBA) finals.

A baseball card of legendary player Mickey Mantle has become the most expensive piece of sports memorabilia in history, selling for $12.6 million (£11.2 million/€12.4 million) at auction, also held last month.