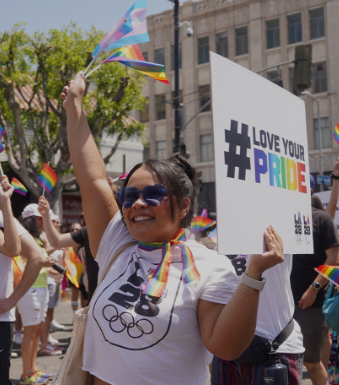 The Los Angeles 2028 Olympics and Paralympics were represented at the city's Pride parade and festival.

More than 50 people represented the Games on a parade route through Hollywood, as the LGBTQ+ community was celebrated.

Retired American figure skater Adam Rippon, a member of the LA28 Athletes' Commission, led the group at the annual event.

The team bronze medallist from Pyeongchang 2018 was the first openly gay member of an American Winter Olympics squad and the 32-year-old is now a human rights campaigner.

"One of the best parts about living in LA is you can be authentically yourself and find a great community here - that’s what makes this place so incredible," said Rippon, a former Four Continents gold medallist who was world junior champion twice.

"This is why I love LA, so many kinds of people with so much great energy celebrating together."

Pride Month is celebrated around the world in June every year.

Los Angeles was one of the cities which hosted the very first Pride marches in 1970, to mark the one-year anniversary of the Stonewall Riots in New York.

"The LA28 Games will be a platform for inclusion, optimism and youthful energy, showcasing the best of Los Angeles and the community," a statement from the Games said.

"The LA28 Olympic and Paralympic Games will leverage a diverse array of voices to co-create an extraordinary Games experience for everyone."