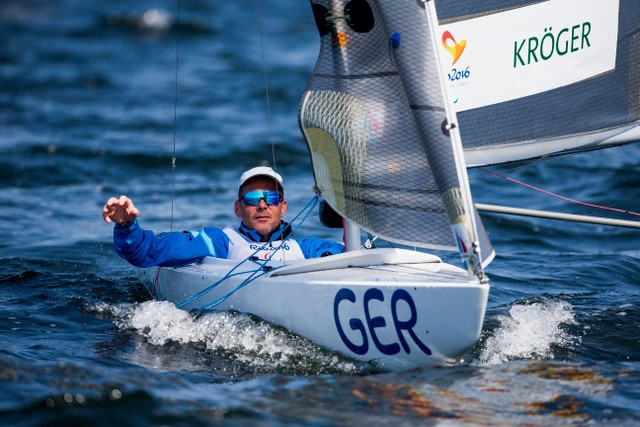 Germany’s Heiko Kröger believes the inclusive line-up at the 2.4mR European Championship shows why sailing "belongs" on the Paralympic programme as a host of Para sailors face able-bodied athletes in Brittany.

Two-time Paralympic medallist Kröger has been confirmed alongside fellow Paralympians Damien Seguin of France, Fia Fjelddahl of Sweden and Antonio Squizzato of Italy in a 16-strong line up of Para sailors in France.

They will be in a 44-athlete start line for the event that runs from tomorrow until May 20 as World Sailing looks to underline its bid for Los Angeles 2028 Paralympic Games inclusion.

"The 2.4mR has been an inclusive boat class for more than 20 years and has been in the spotlight thanks to the Paralympic Games," said Kröger.

"Now, it is widely known that the 2.4mR class offers sailors with and without disabilities the opportunity to compete at the same level - to achieve this equality, sailors with disabilities have to train a lot.

"There is no sport or discipline at the Paralympic Games where men and women with a wide range of disabilities can compete against each other without compromise.

"This is why we belong back in the Paralympics."

“We’re excited to see the line-up for this year’s 2.4mR European Championship just 50 days before we submit our application to reinstate sailing into the Paralympic Games," said David Graham, CEO of @worldsailing

Para sailing featured at five successive Games from Sydney 2000 to Rio 2016 only to lose its place for Tokyo 2020.

World Sailing is attempting to get the sport back on the Paralympic programme for Los Angeles 2028.

"We’re excited to see the line-up for this year’s 2.4mR European Championship just 50 days before we submit our application to reinstate sailing into the Paralympic Games," said Graham.

"Sailing is special, no doubt about it.

"No matter how wide or limited your physical and sensory ability, you can sail - and importantly you can win.

"Sailing gives athletes with wide impairment ranges the support they need and the unique opportunity to compete in a highly demanding sport, both mentally and physically.

"We feel this inclusivity is one of our keys to Paralympic reinstatement, and we will be focusing on this closely with the International Paralympic Committee."

Among those looking to challenge for the top spot is Seguin, who claimed gold at Athens 2004 and Rio 2016 as well as silver at Beijing 2008.

Seguin is up against 10-time world champion Kröger, who earned gold and silver medals from Sydney 2000 and London 2012 respectively.

Fjelddahl, who became Sweden’s youngest athlete at a Paralympic Games when she competed at the age of 16 at Rio 2016, and three-time Paralympic sailor Squizzato are also in the line-up.

"Emotions are high going into a European Championship like this - I’ll be competing against Paralympic, world and national champions with lots of medals already," Squizzato said.

"I won’t be thinking about my disability or integration - I’ll be thinking how beautiful this sport is, and why using the natural elements of wind and water is inclusive by definition."