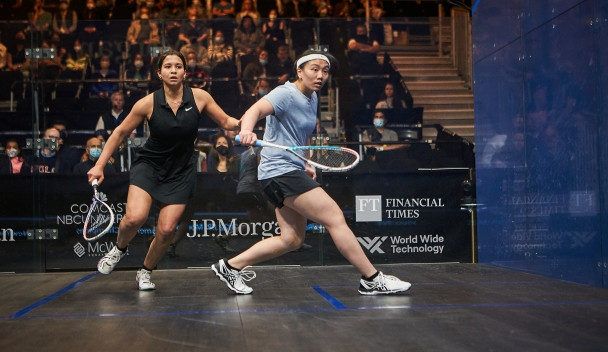 Wildcards Chan Sin Yuk of Hong Kong and the United States' Timothy Brownell both saved multiple match points to book their places in the second round of the Tournament of Champions in New York City.

Yuk defeated Egypt's Kenzy Ayman in the challenger final to progress to the main draw and her first-round match against another Egyptian, Zeina Mickawy, capped off the opening day of action at Grand Central Station.

The Hongkonger took the first game 13-11 on a tiebreak but found herself trailing after losing both the second and third games.

Yuk was on the ropes in the fourth, having to save seven match points before eventually winning a gruelling game 21-19.

She then powered to a rapid 11-5 win in the decider to set up a round-two clash with world number seven Salma Hany of Egypt.

"I was just thinking about getting this game [the fourth] and all the cheering was making me want to fight more," said Yuk.

"I’m going to have a light squash session [tomorrow] and recover well."

Also in the women's draw, American Sabrina Sobhy cruised past England's Millie Tomlinson 11-7, 11-4, 11-4 and Egyptians Nada Abbas and Farida Mohamed also went through in straight games against Latvian Ineta Mackeviča and Haley Mendez of the US, respectively.

He forced the final game into a tiebreak after being 10-8 down and then won four consecutive points to progress to the next round, where he is set to meet Indian number one Saurav Ghosal.

"We’re doing a lot of good work at US Squash over at the National Centre," Brownell said.

"I’m a testament to it, I showed up nine months ago and I think [US Squash head national coach Ong] Beng Hee just had to laugh at me.

"To come out and get a win on the glass court is a dream, but we’re just getting started."

The action continues tomorrow with the remaining first-round matches in both the men's and women's tournaments.