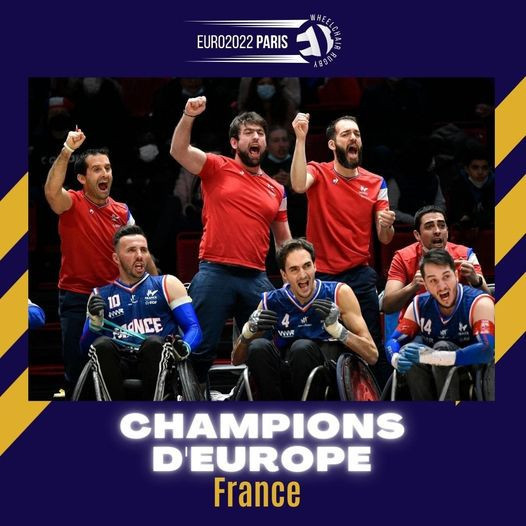 Hosts France were crowned continental champions for the first time at the Wheelchair Rugby European Championship Division A in Paris, beating Paralympic gold medallists Britain in the final.

Britain had won the previous three editions of the European Championship, and entered this year's competition at the Halle Georges Carpentier in the French capital having triumphed at Tokyo 2020.

However, backed by a home crowd, the French team ranked sixth in the world had the chance to build on two successive third-place finishes at the European Championship.

The host nation edged out Britain by a solitary point, clinching the title with a 44-43 victory.

The 2019 runners-up Denmark collected bronze with a 58-52 victory over Germany, who missed out on a first medal on this stage since 2009.

In the match for fifth, Switzerland overcame Russia 53-40.

Russia had progressed to that game after Poland withdrew from their tie yesterday, citing the ongoing events in Ukraine.

Poland were beaten 49-42 by The Netherlands in the match to decide seventh and eighth.

As semi-finalists, France, Britain, Denmark and Germany all qualified for this year's World Wheelchair Rugby World Championship, which is scheduled to be held in Vejle in Denmark from October 8 to 17.