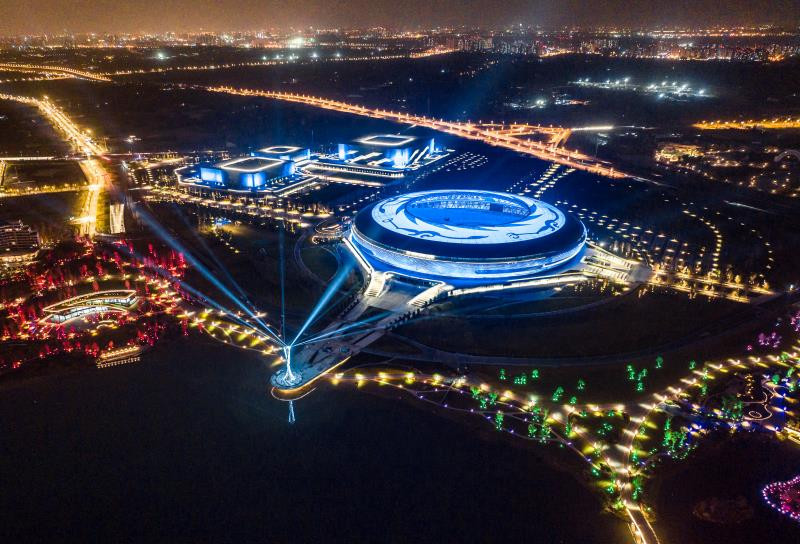 A flame tower built for the 2021 International University Sports Federation (FISU) Summer World University Games in Chengdu has been lit up as part of a trial phase.

The 31-metre high tower is a larger version of the Chengdu 2021 Torch - known as Rong Huo.

It has been built in Chengdu's Dong'an Lake Sports Park, which will turn into the World University Games Park during the event.

Twelve curves on the main structure represent the 12 rays of the sun in Chinese culture, and spiral upwards to support an ignition device.

During the Games, people will be able to see a flame rise throughout the tower before appearing at the top.

Lighting has been designed to be "energy saving", and the appearance of the flame can be adapted to represent different events, holidays and festivals.

Various colours can be used with light beams flying into the sky using a projection lamp.

After the Games, the flame can be reproduced using a hologram.

Organsiers hope that the tower will become a must-visit site during Chengdu 2021.

The flame will be able to resist the rain and strong winds, it is claimed.

In May, the International University Sports Federation confirmed new dates for the Games after the event was pushed into next year due to the coronavirus pandemic.

The action is now scheduled to take place between June 26 and July 7, with the dates avoiding the Commonwealth Games in Birmingham and the World Athletics Championships in Oregon.

Eighteen sports are on the programme for the Games, which will be the third in China after the Summer Universiades in Beijing and Shenzhen in 2001 and 2011.

The name Chengdu 2021 is being retained.