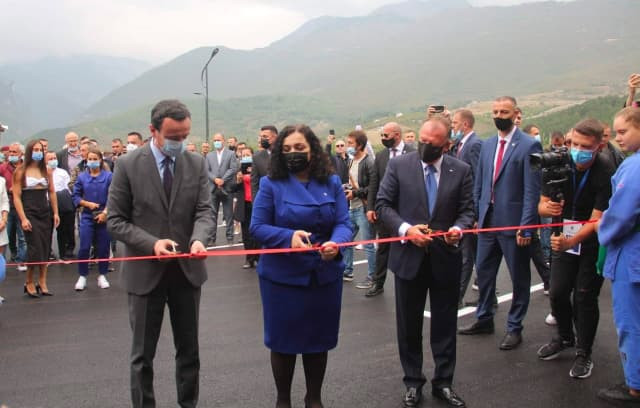 The new facility is based in the city of Peja in western Kosovo on Marius Vizer Street, which is named after the IJF President in honour of his support of the Kosova Judo Federation.

After the official opening of the training centre, Vizer presented brothers Agron and Driton Kuka with the IJF gold medal.

Agron Kuka is President of the Kosova Judo Federation, while Driton Kuka coaches the national team.

Kosovo's three gold medals since it made its Olympic debut at Rio 2016 have all come in judo, with Majlinda Kelmendi triumphing in the women's under-52-kilogram division five years ago, and Distria Krasniqi and Nora Gjakova winning the women's under-48kg and under-57kg titles respectively at Tokyo 2020.

The three were presented with the official statues of Jigorō Kanō, the founder of judo, and then received the Kosovo Presidency medal along with Driton Kuka.

"Over the years, Kosovo has become a model of both sporting and educational development," said Vizer.

Today I had the honor to speak at the inauguration ceremony of the 🇽🇰 National Judo Center in beautiful Peja.

I expressed the gratitude of the people of the Republic of Kosovo to our Golden Judokas and wished our superstar team continued success. pic.twitter.com/2Vh6MbC2eX

"The results achieved by national athletes are the fruit of the daily work of enthusiasts of judo and sports, which from the start had the unwavering support of the country's authorities.

"Olympic gold is a dream for many athletes.

"You have already achieved it three times, without mentioning the world medals.

"This training centre will be one more tool for development and performance available to Kosovan judoka and the country as a whole."

Driton Kuka is also excited to have the training centre at the disposal of Kosovo's judoka.

"At first I had to act as a coach, psychologist, physiotherapist," Kuka said.

"We didn't have what it takes for top level sport, with a hall with a leaky roof and bad mats.

"The situation has changed, thanks to the support of the IJF and the country’s authorities.

"Judoka will now be able to train in a light venue, on beautiful red and gold tatami."

Judo is Kosovo's most successful individual sport, and the country has numerous schools and clubs dedicated to it.