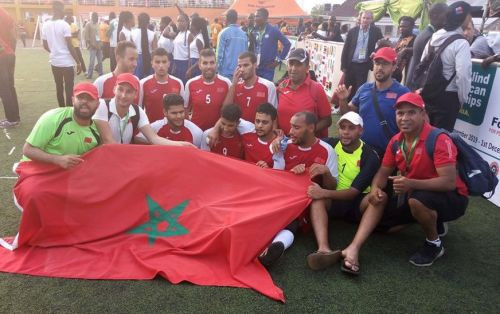 Morocco are targeting a first podium finish in the five-a-side blind football tournament at the Tokyo 2020 Paralympics.

And with eight years’ playing experience for the team, Imad Berka is confident that his country will achieve its ambition.

The veteran defender started playing football in 2000 at a school for the blind with his friends where they put gravel inside a football for it to produce an audible sound.

"I felt it was a joke at the beginning," he told the International Paralympic Committee website.

"I could not imagine that a blind person could play football.

"When I tried, I discovered that I can really do it.

Since making his debut for the national team in 2013, Berka has represented his country at the Tokyo 2014 and Madrid 2018 World Championships and the Rio 2016 Paralympics.

He has also been in the team that won all four editions of the African Championships.

The Atlas Lions, as Morocco are nicknamed, claimed the last Tokyo 2020 5-a-side football qualification spot after defeating Mali 5-1 in the final of the continental competition.

Morocco is the only football five-a-side nation from Africa to compete at the Paralympics and it is an achievement that Berka personally takes very seriously.

"Being the only representative of Africa is a call of pride but at the same time a big responsibility," he said.

"Mali, Ivory Coast and Cameroon all deserve to be there as our close contenders."

Tokyo 2020 will be Berka’s and Morocco’s second Paralympics following their debut in Rio 2016, where they drew one match and lost two.

A good showing would help Africa's desire for more Paralympic berths, but Morocco’s momentum for Tokyo 2020 was halted by the global outbreak of COVID-19.

"There was a total lockdown in Morocco and we had nowhere outside of our home to practice.

"I had been preparing individually, but now I am preparing with the national team."

Morocco has completed two training camps in capital Rabat this year and Berka is still optimistic that the team will return home from Tokyo 2020 with their first medal.

"So many countries are likely to be on the podium in the Paralympic Games," he said.

"Apart from Brazil and Argentina, we have China, Spain, France and ourselves.

"We have to honour the continent.

"It is our strong aim and ambition to be on the podium."