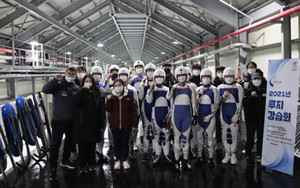 The Korea Luge Federation (KLF) has organised an open training session for young people at the venue that hosted the sport at the Pyeongchang 2018 Winter Olympic Games.

The event at the Pyeongchang Olympic Sliding Centre was held to bring the sport to the attention of the public in South Korea.

Head coach Oleg Demchenko also visited the event to give the participants feedback.

The event lasted two days and was conducted under strict hygiene standards to prevent the spread of COVID-19.

"It included a theory lecture and three practical training sessions."

Many of the participants tried the sport for the first time, with part of the KLF's aim being to spot young talents ahead of the Gangwon 2024 Youth Winter Olympic Games, which are set to be held in the country.

"The theory lecture covered overall explanations of luge including all luge equipment and safety issues that must be imperatively observed during practical training sessions," added KLF secretary general Young Lee.

South Korea hosted the Winter Olympics for the first time in 2018.