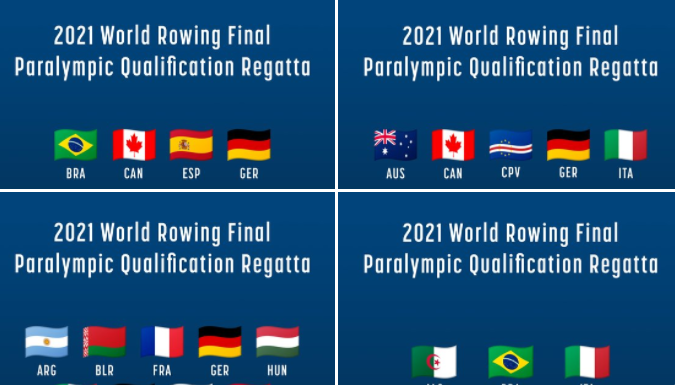 Jaroslaw Kailing confirmed his status as one of the favourites in the PR1 men's single sculls competition as he won his heat on the opening day of the final Tokyo 2020 Paralympic Games qualifier in Gavirate in Italy.

The Pole, eighth at the 2019 World Rowing Championships, secured the one automatic qualifying place on offer in his heat for the A-final after holding off the challenge of Argentina’s Alejandro Magno Vera, who took second place.

Germany’s Marcus Klemp secured the other automatic A-final place on offer today as he won the second heat after making a strong start to try and take the sting out of the sprint finish of his rival Zsolt Peto of Hungary.

Home athlete Massimo Spolon put in a mid-race move to become the German’s chief challenger, but Klemp maintained his lead to the end.

There was victory for the home crew in the first of the PR2 mixed double sculls heats, although they were pushed to the line by Canada.

Australia took the other automatic final place as they won their heat after dominating the race ahead of Uzbekistan and Latvia.

Racing has begun in Gavirate for the Final Paralympic Qualification Regatta - here this morning's race report. On to the repechages tomorrow morning to try and secure a spot in the A-Finals Saturday!#rowing #pararowing #FPQR #FPQRGaviratehttps://t.co/n7M9oURiQS

In the PR4 mixed coxed four, Canada put their new line-up together with two returning members of their bronze-medal Paralympic crew from 2016 with successful results.

They held off a determined challenge from Brazil to win their heat, and the other automatic final place went to Germany, who finished ahead of Spain, Japan and Mexico in the second heat.

With only four boats entered for the PR1 women’s single sculls all will take part in Saturday’s (June 5) final, but today was an opportunity for all involved to test their racing condition.

Brazil’s Claudia Cicero dos Santos Sabino, who made her last international appearance in finishing sixth at the 2016 Paralympics, crossed the line first but was relegated to last position when it was found her boat was underweight.

That left Italy the winner ahead of Sweden and Algeria.

The Final Paralympic Qualification Regatta, which will conclude on Saturday (June 5), was pushed back a month by World Rowing in February to allow the event to take place following concerns over athletes travelling to Italy amid the COVID-19 pandemic.