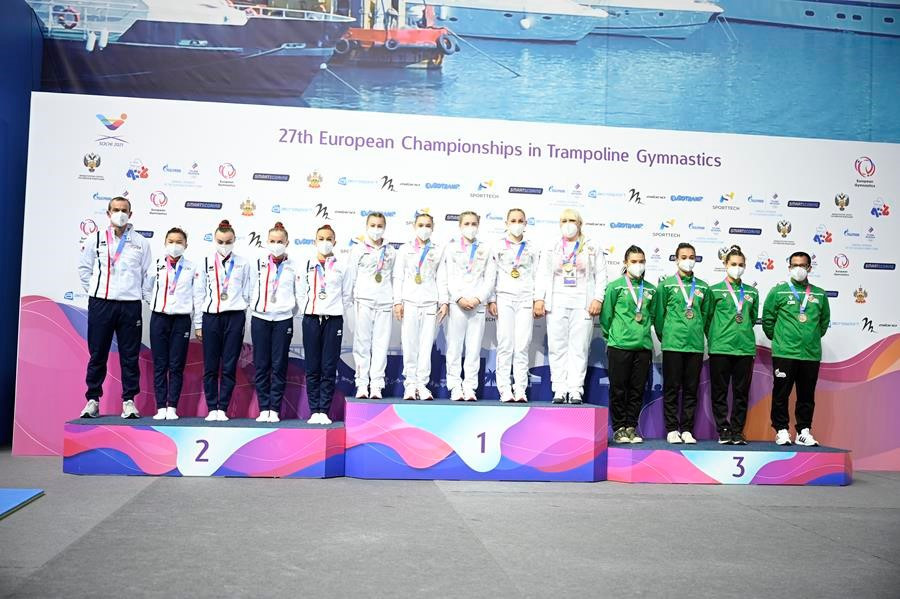 Hosts Russia claimed a clean sweep of the junior team titles on the penultimate day of the European Gymnastics Trampoline Championships.

Russia took victories in both the boys and girls team competitions in the tumbling and double mini-trampoline discipline at the Iceberg Arena in Sochi.

In the boys tumbling Russia claimed victory by five points with their line-up of Dmitrii Shatalov, Sergey Finichenko, Danila Medvedev and Murat Koshev taking victory with a score of 103.600.

The silver medals went to Belarus with a score of 98.600 while bronze went to Azerbaijan who scored 97.100.

In the girls tumbling Russia claimed an even more emphatic victory, this time by seven points, as their line-up of Arina Kaliandra, Kseniia Lutkova, Kseniia Tiuzhaeva and Aleksandra Liamina scored 96.900 points on route to gold.

France took the silver medals after scoring 89.600 while the bronze medals went to Portugal with 72.800 points.

Russia’s dominance continued in the boys double mini-trampoline discipline as their line-up of Aleksandr Butko, Aleksei Tretiakov, Ilia Matroshilov and Vadim Alisov claimed victory by more than eight points with a total score of 109.800.

The hosts nearest rivals were Portugal who scored 101.500 to take silver while the bronze medals went to Ukraine who scored 86.900.

Russia’s clean sweep of the day’s finals concluded in the girls double mini-trampoline discipline as the hosts took victory by just over six points.

Portugal took silver and Sweden claimed bronze, with both countries ending on the same tally of 96.200 points.

Meanwhile the Executive Committee of European Gymnastics have announced that the 2022 European Championships in Trampoline, Tumbling and Double Mini-Trampoline have been awarded to the Italian city of Rimini, and are scheduled to take place from June 1 to 5 2022.