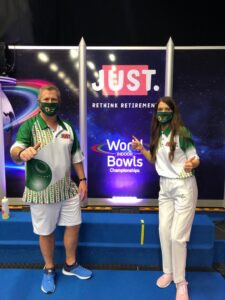 Gourlay and Rednall, winners in this discipline in 2016 took on all English pairing Greg Harlow and Rebecca Willgress in what proved to be the pick of the day’s matches at Potters Leisure Resort in Great Yarmouth, England.

The first set was shared 9-9 after Harlow and Willgress produced a full house on the final end to ensure the set was halved.

There was nothing to separate the pairs in set two as Harlow scored a single with his final bowl of the set to ensure it was shared 5-5.

This took the match into a tie-break of three ends, where there had to be a winner. Gourlay and Rednall triumphed by two ends to one to advance to the semi-final stage.

Gourlay and Rednall will take on another Scottish-English pairing in the last four after Robert Paxton of Scotland and Carla Banks recorded a tight victory over Marion Purcell of Wales and Mervyn King of England.

The first set was deadlocked heading into the final end and after a weighed shot from Paxton opened the head he was able to score a single to help the pair take it 7-6.

In set two Purcell and King opened up a 5-1 lead before an impressive comeback from Paxton and Banks saw score eight shots in four ends and win the set 9-5.

In the other half of the draw, Scottish pairing Julie Forrest and Stewart Anderson triumphed over their English opponents Ellen Falkner MBE and Mark Dawes, in a match where Falkner appeared to be slightly hampered by a shoulder injury.

Falkner and Dawes opened up a 5-2 lead in set one but Forrest and Anderson came from behind to take the set 8-6.

In set two Forrest and Anderson showed their champion qualities scoring six shots on four out of the next five ends to take the set 9-4.

Forrest and Anderson will face all English pairing Les Gillett and Devon Cooper in the last four after they comfortably defeated Laura Daniels of Wales and Paul Foster MBE of Scotland.

Cooper, a 19-year-old university student and Gillett got off to a flying start racing into a 6-0 lead, before winning the set 10-2.

Set two saw Daniels and Foster take the lead but Gillett and Cooper scored a lucky treble which helped them to take it 7-4.

Action in England is being played behind closed doors owing to the coronavirus pandemic, with play continuing tomorrow with two more first round matches in the open singles and two ladies singles quarter-finals.