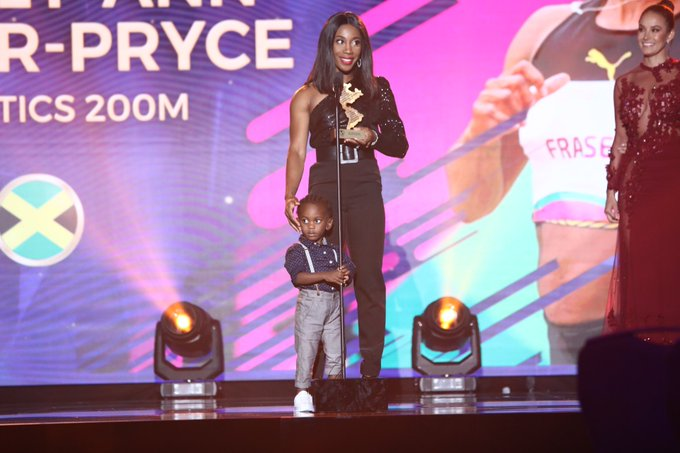 The pair were rewarded for their performances at the 2019 Pan American Games in Lima at a ceremony featuring numerous star athletes and key officials from the region.

Fraser-Pryce was among the major stars to attend the event, with the multiple Olympic champion rewarded for her double gold at the World Athletics Championships.

She had also starred on her first appearance at the Pan American Games, setting a women's 200 metres record of 22.43sec in Peru's capital to secure gold.

Barretto was rewarded for his successful Games in Lima with the men's award.

The Brazilian gymnast had already earned gold and silver medals in the team event at Guadalajara 2011 and Toronto 2015.

Barretto helped his nation to men's team gold again in Lima, while he also topped the podium in the men's pommel horse and horizontal bar competitions.

Argentina's basketball squad were crowned as winners of the best men's team, following their triumph at Lima 2019.

The squad was led by Athens 2004 Olympic gold medal winner Luis Scola, with the team also enjoying an impressive run at the Basketball World Cup in China following the Games where they were surprise silver medallists.

Argentina enjoyed further success in the team categories by winning the women's prize, with their hockey triumph at Lima 2019 earning recognition.

The country had finished as silver medallists at the past two Pan American Games by cruised to victory in Lima with an unbeaten run of six games, including scoring 47 goals and conceding just three.

Mexico's 17-year-old waterskiing star Patricio Font was named as the men's NextGen winner, the prize awarded to the best athlete under-20.

The women's NextGen honour was awarded to United States' rhythmic gymnast Evita Griskenas, the 18-year-old winning four gold and one bronze medal at the Games.

As well as recognising the upcoming generation, an American great was also honoured by the organisation during the ceremony.

Carl Lewis, who attended Lima 2019 in a coaching capacity and presented medals, was named as winner of the Panam Sports Legend Award.

The former men's 100m world record-holder and nine-times Olympic gold medallist competed for the first time at the Pan American Games in 1979.

He was the youngest member of the US team in San Juan.

Lewis returned to the Games at Indianapolis 1987, winning gold medals in the long jump and 4x100m.

Ecuadorian boxer Julio Castillo was named winner of the Panam Sports Values Award after he accepted a controversial decision in his men's 91 kilogram final in Lima and encouraged the crowd to support gold medallist Erislandy Savon of Cuba.

Colombia's Mariana Pajon, a multiple Olympic, world and Pan American Games BMX gold medallist, was honoured for her achievements off the bike with the Changemaker Award.

Powerlifter Herbert Aceituno also achieved a Games record to end El Salvador's 20-year wait for a gold medal at the Games, a feat earning him the Best Male prize.

Costa Rica's Deysiana Mena was named as the Best Coach after guiding her daughter Andrea Vargas to the women's 100m hurdles title at Lima 2019.

The US received the best National Olympic Committee (NOC) prize for topping the Lima 2019 medals table with 120 gold, 88 silver and 55 bronze.

The honour for the top NOC with a population under one million went to Grenada.

The country, which has a population of around 100,000, celebrated its maiden gold at the Games with Anderson Peters winning the men's javelin.

Peru were crowned the Most Improved NOC after winning 11 gold, seven silver and 21 bronze medals at their home Games,

They had never previously never won more than 14 medals at any single Games in history and only eight golds.