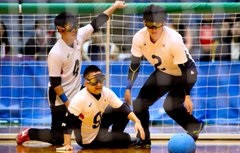 Japan progressed to the men's semi-final of the International Blind Sports Federation (IBSA) Goalball Asia-Pacific Championships in Chiba, despite a heavy loss to Iran.

A 10-6 victory against Indonesia at the Chiba Port Arena secured Japan's semi-final place, with a 10-2 defeat to Iran later in the day inconsequential.

The two sides are due to meet again in the final four, however, with Iran booking their place when they overwhelmed Australia 11-1.

China set up a semi-final clash with South Korea having got past Australia 14-6.

A 3-3 draw with Thailand was enough to see the South Korean side into the semi-finals.

Only two games in the women's competition were held, with Japan edging past South Korea 2-1 and China beating Australia 4-1.

The semi-finalists are set to be decided tomorrow when Thailand take on South Korea, China play Indonesia and Japan come up against Australia.

The champions of both the men's and women's events will qualify for next year's Paralympic Games in Tokyo, providing they have not already booked their place.

If that happens, the next best-ranked side will advance to Tokyo 2020.