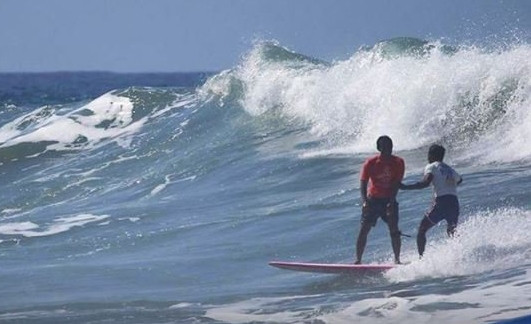 Home surfer Roger Casugay was hailed as a hero today at the Southeast Asian Games in the Philippines as he sacrificed what appeared to be a sure-fire gold medal chance to save his Indonesian competitor, Arhip Nurhidayat from drowning.

As reported by several news sources, the Indonesian surfer in question lost his board to the waves during an event.

Casugay saved him from the rolling waves and the two surfers then shared a single surfboard as they rode to the beach to safety.

Nurhidayat then held up Casugay’s hand, declaring him a "champion".

The event, which had already been delayed thtee times due to bad weather, has been postponed until further notice.

Surfing has been one of the worst-hit sports at the 2019 SEA Games due to Typhoon Kammuri.

Meanwhile, the host nation has lifted its gold medal total to 71, adding another eight titles today and moving closer - with four days of action remaining - to its previous highest marks of 91 golds, in 1991, and 112 in 2005, when both events took place in Manila.

Both Schooling and Quah went below the Olympic qualifying mark of 51.96 for the 100m butterfly to book their tickets for Tokyo 2020.

Schooling is the current Olympic record holder for the event with a time of 50.39.

This was Schooling’s first individual medal of the Games following his silver in the 50m butterfly yesterday after he was pipped by team-mate Teong Tzen Wei.