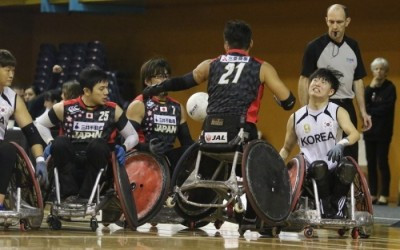 Hosts South Korea are among the three teams battling it out for a place at next year's Paralympic Games in Tokyo.

With Japan already qualified as the Paralympic host nation and Australia securing their spot at last year's IWRF World Championships in Sydney, the five-team tournament will see South Korea competing against New Zealand and Thailand for a Tokyo 2020 berth - the highest-ranked team will join the field.

The first-place finisher in the round-robin group stage goes straight through to the final, on Monday (September 9).

The other finalist will be the winner of the match between the runners-up and third-place finishers on Sunday (September 8).

Rio 2016 Paralympic gold medallists Australia enter the tournament as defending champions and will be gunning for their eighth gold medal since the IWRF Asia-Oceania Championship was first staged in 2001.

World champions Japan are out to claim gold for the second time, following their triumph in 2015.

The Opening Ceremony will then be held before South Korea go up against Thailand and New Zealand do battle with Australia.