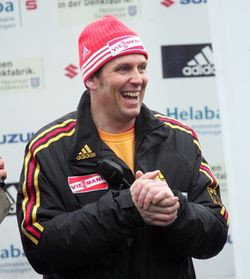 The International Luge Federation (FIL) have confirmed there is only one candidate for the new role of vice-president of marketing at its Congress this week.

The 67th FIL congress in Ljubljana in Slovenia is set to elect the first ever vice-president for marketing in its 62-year history.

The only candidate in contention is Germany’s Thomas Schwab, a former doubles athlete who raced with Wolfgang Staudinger and won an Olympic bronze medal at Calgary 1988 competing for West Germany.

The 57-year-old Schwab is currently Chairman of the German Bobsleigh, Luge and Skeleton Federation.

The event in Ljubljana is also due to see the Federation name the hosts of the next two FIL World Championships for the artificial track disciplines - where again there is only one candidate in each category.

The Congress have to re-award the honour of hosting the 50th World Championships in 2021 originally given to Calgary.

The track’s operator, WinSport, is unable to guarantee that it will be ready to host due to delays in renovation works.

The Canadian Luge Association has suggested Whistler as a replacement, and the 2010 Olympic track is unopposed.

Oberhof is the only candidate to apply to host the 2023 World Championships, with that event seemingly certain to go to the German town.