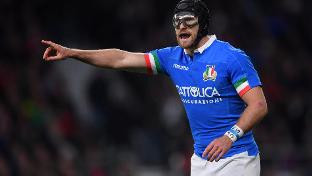 World Rugby has approved an amendment to a law that will enable the wearing of goggles at all levels of the game.

In line with the International Federation’s vision of "a sport for all", approval by the World Rugby Council follows a comprehensive law trial launched in 2014 after World Rugby identified the need to develop a product that paves the way for greater participation in a safe environment.

In partnership with Italy-based eyewear specialists Raleri, a design was developed to facilitate the inclusion of prescription lenses beyond contact lenses into a device that does not increase the risk of injury to the wearer or to players coming into contact with the wearer.

The detailed feedback from participants in the trial allowed World Rugby to develop an evidence-based performance specification in partnership with the Ulster University and the University of Bradford in Great Britain to refine the design of the goggles.

The trial has enabled those with limited or no sight in one eye to participate in the sport more comfortably, as demonstrated by the story of Italy international Ian McKinley, who became the first wearer of goggles in a senior international.

Born in Dublin, McKinley started his career with Irish team Leinster before he was forced to retire from rugby union in 2011 after losing the sight in his left eye after being caught by a stray boot.

He returned to the sport with the aid of protective goggles and made his Six Nations debut for Italy this year, having qualified via the residency rule.

The 29-year-old welcomed the announcement via a short video message.

"The approval of this law amendment is a very significant advancement for rugby and for contact sport, and as someone who championed the project from its inception, I am delighted to see goggles become enshrined within our laws," World Rugby chairman Sir Bill Beaumont said.

"This is a strong demonstration of World Rugby’s commitment to game innovation and player welfare, but also our mission to making rugby a more accessible and inclusive sport at all levels.

"This pioneering project was launched to address a specific issue, and with the help of Raleri, Ulster University and the University of Bradford, we have successfully developed a product that will enable more people to play rugby in a safe and comfortable way and we thank all those involved, particularly the players, for their support and passion in making this idea a reality that will transform access to the sport."

Reflecting its commitment to advances in player welfare, the World Rugby Council also approved a "Law 4" trial to enable the assessment of headgear devices which, according to the manufacturers, have been designed to achieve specific, quantifiable medical advances, while aligning with "Law 4" and "Regulation 12" criteria.

Recognising the importance of assessing the evolution of technologies designed to manage and improve player welfare, trials will be permitted subject to strict criteria, including detailed evaluation by World Rugby, safety and independent test house assessment and shared trial research.

While headgear is permitted in law on the basis that it does not cause harm to the wearer or an opponent, current research does not indicate a concussion prevention benefit and World Rugby says manufacturers should not make such claims.

World Rugby has also issued a law application guideline and supporting educational materials to assist everyone in the game with the on-field sanction decision-making process for high tackles and shoulder charges.

Reflecting the International Federation’s evidence-based approach to reducing the risk of concussion, the "decision-making framework for high tackles" was developed in partnership with union and competition delegates attending the player welfare symposium in France in March and includes player, coach, match official and medic input.

It is a step-by-step guide with the purpose of firstly improving the consistency in application of on-field sanctions by distinguishing between dangerous tackles that warrant a penalty, yellow card or red card, and secondly supporting protection of the head of both players by consistently and frequently sanctioning the tackle behaviour that is known to be the highest risk.

With research demonstrating that 76 per cent of concussions occur in the tackle, with 72 per cent of those to the tackler, and that head injury risk is 4.2 times greater when tacklers are upright, the framework is aimed at changing player behaviour in this priority area, via the promotion of safer technique, and builds on the January 2017 edict on tougher sanctioning of high tackles.

Available as a step-by-step PDF, the framework is also supported by an educational video and illustrates what match officials are looking for when determining a sanction.

The process focuses on the source of direct contact to the head, the degree of force and, for the first time, any mitigating or aggravating factors that may be applied by the match officials.

It is claimed it will be a useful tool for coaches, players, match officials, media and fans.

Furthermore, it is said to provide a fresh emphasis for future decision-making and does not retrospectively judge previous decisions.

"As a sport, we continue to put injury prevention at the heart of all our decisions," Sir Bill said.

"The decision-making framework for high tackles reflects that commitment.

"It is not a law change, but a provides a step-by-step guide for match officials with the objective of reducing the risk of injury through stronger and more consistent sanctioning of high-risk tackle behaviour.

"We are on an important and bold journey that will take the commitment and support of everyone in the game.

"I would especially like to thank the competitions and unions for their full collaboration in this important process."

"The framework will benefit everyone in the game, not just match officials, and will set the standard that is expected from match officials when considering a high tackle or dangerous shoulder charge."

All World Rugby competitions and international matches will adopt the law application guide with immediate effect along with any competition that is yet to begin.

Competitions currently in progress can either implement immediately or at the beginning of the next competition season/hosting.