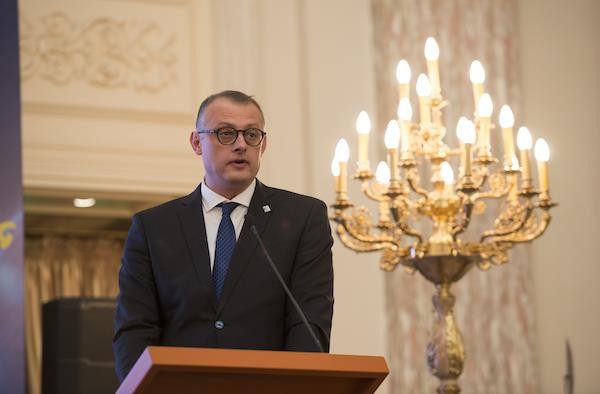 Slovakia’s Peter Tarcala has been elected President of Badminton Europe for the next four years.

Tarcala was first elected to the continental governing body’s Council in 2003, serving as director for events until 2009 when he became director for sport.

He maintained that position until 2015 before becoming the chair of the Major Events Commission.

Tarcala will now make the step up to President after his election at the annual delegates' meeting in Ukraine’s capital Kiev.

The position became available after Belgium’s Gregory Verpoorten decided not to seek re-election at the end of his term.

He claimed in June of last year that he wanted more time to spend with his family.

"Tarcala is proud and excited about being elected to his new position and is thankful towards the members' associations who have put their trust in him, while promising to keep up the good work that has been done so far and work even harder in facing upcoming challenges," a Badminton Europe statement reads.

Tarcala, who stood unopposed, added: "I am delighted.

"I am honoured and touched.

"I am thankful to the delegates that they put their trust in me.

"I will continue with the projects and activities which are already run by the professional office, but of course we will try day by day to create new activities."

Tarcala, who is chair of the Badminton World Federation's (BWF) Events Committee, will be the first Badminton Europe President from Slovakia.

Former Presidents have originated from Denmark, England, Germany, the Netherlands, Sweden, Switzerland and now Belgium with Verpoorten stepping down.

Portugal's Joao Matos also took office for a short period of time as Acting President when now-BWF head Poul-Erik Høyer Larsen of Denmark stepped down in 2013.

Verpoorten was elected Badminton Europe President in 2014 and re-elected for a four-year term in 2015.

Badminton Europe has confirmed that Tarcala, President of the Slovak Badminton Federation (SBF) from 2004 to 2006 and current general secretary of his national federation, will not continue in his role as chair of the Major Events Commission in connection with his new duties.

A successor is due to be announced soon.

Tarcala will also step down as general secretary of the SBF but will continue his duties with the BWF, where his Council member term ends in May 2021.

His main ambition for his Badminton Europe Presidential term is to work towards the development of the sport in different areas.

"I want to develop every possible area within Badminton Europe and in European badminton," Tarcala said.

"I want us to have the best players and coaches that we possibly can.

"We need good technical officials and we need to increase the numbers of members."