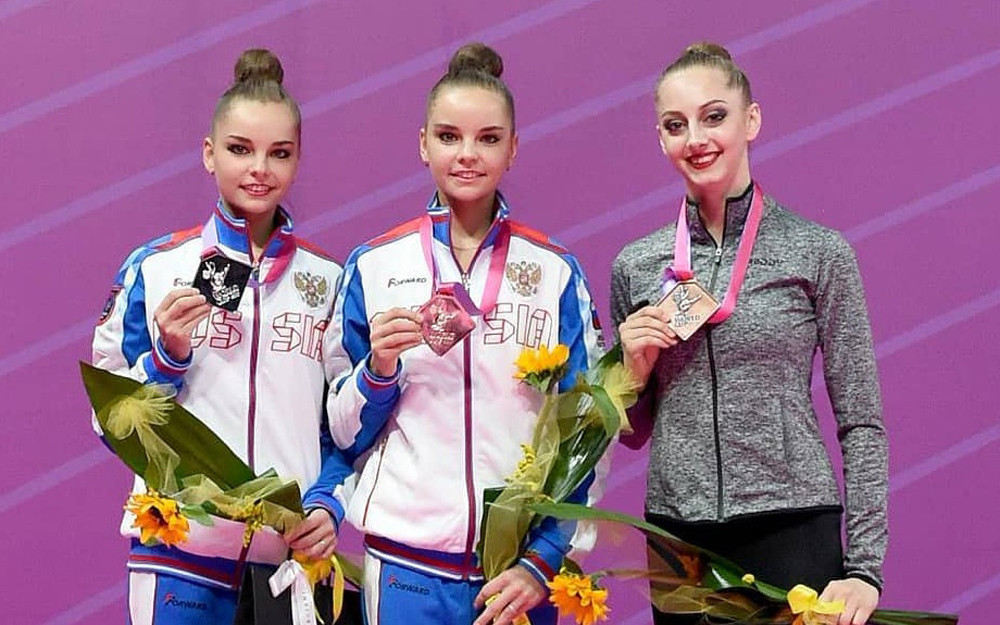 Twins Dina and Arina Averina turned the International Gymnastics Federation (FIG) Rhythmic Gymnastics World Cup in Pesaro into a family affair once more as they shared the five individual gold medals between them.

The Russian siblings produced a repeat of their clean sweep of 2017, with Dina winning three gold medals, including the all-around title, and Arina two at the Italian city’s Vitrifrigo Arena.

Dina secured a third successive all-around gold medal with a score of 85.750 points, having prevailed with the clubs and ribbon.

To illustrate her consistency, even on her lowest-scoring apparatus, the ball, she ranked third and duly ended two points clear of Arina overall with Bulgaria’s Boryana Kaleyn taking the bronze.

There were also gold medals for Dina with the clubs and ribbon.

In the clubs, she finished ahead of Italy’s Alexandra Agiurgiuculese with Belarus' Alina Harnasko third.

Harnasko took her second bronze in the ribbon, while Bulgaria’s Katrin Taseva came away with silver, just as she had 12 months earlier at the same venue.

Arina’s victory over Dina in the hoop final came by a 0.1-point margin, thanks to her superior execution, while Belarus’ Katsiaryna Halkina claimed bronze.

Her other gold medal came in the ball final, where Kaleyn tied for second with Dina but took her second silver of the weekend owing to her superior execution score of 8.9 points.

On an excellent weekend for Russia’s gymnasts, there was also a gold medal for the country’s team in the groups all-around event.

Russia, the reigning Olympic and world champions, finished 1.5 points ahead of their nearest challengers having outscored their opponents with both apparatus.

Bulgaria could only manage fifth place in the event where they won a World Championships gold medal last year.

Ukraine, the reigning world champions, had to settle for the silver medal with Israel earning bronze.

The three-day event in Pesaro was the first of four FIG Rhythmic Gymnastics World Cups scheduled this month with subsequent events following in Sofia, Tashkent and Baku.

For each gymnast and group taking part, their score from their best three events will count towards their final world ranking total.

The 2019 series does not count towards qualification for Tokyo 2020.

There will be Olympic places at stake, however, in next year’s series.