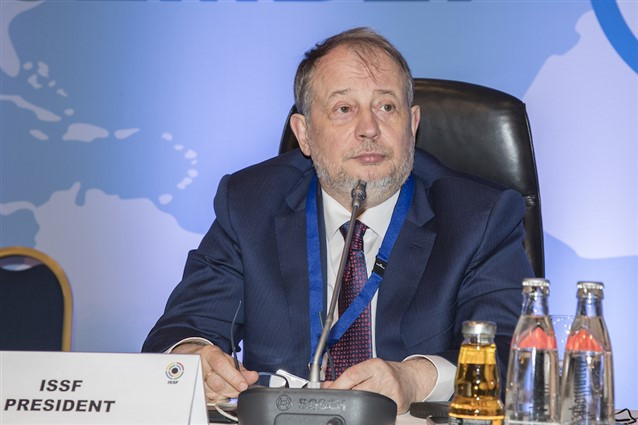 Vladimir Lisin of Russia has been elected President of the International Shooting Sport Federation (ISSF) in a dramatic knife-edge ballot at the body’s 68th General Assembly here today.

The Russian - who now faces the task of reuniting the body and then cementing shooting sport’s future in a challenging and increasingly competitive environment - will succeed Olegario Vázquez Raña of Mexico, who was stepping down after 38 years.

The outcome represents a less than wholehearted endorsement of the wealthy steel tycoon, who has been head of the European Shooting Confederation since 2009 and was regarded as Vázquez Raña’s preferred candidate.

While he called for "evolutionary transformations", his passionate opponent was more critical of current ISSF leadership and prescriptive about what the Federation needed to do in future.

The result also elevates another Russian to a position of influence in international sport at a time when the country's reputation in many sports circles is low as a consequence of the still-rumbling doping crisis.

As he sets about his duties, Lisin will be assisted by Alexander Ratner, a veteran of the Moscow 1980 Olympic Games Organising Committee, who is now a German citizen.

Ratner, who will take over from Franz Schreiber as secretary general, won his election - which took place subsequent to the Presidential election - much more convincingly, polling 161 votes out of 290 against two other candidates.

On what was by any yardstick a momentous day for shooting after such a long period under one leader, the key session came after lunch.

The chalk-and-cheese contrast between the two Presidential candidates was apparent in their respective pre-vote presentations.

First up, Lisin was business-like and rather brusque.

He emphasised that there were no plans to move the ISSF headquarters from Munich, although a switch to a new building might be considered, and advocated a more significant role for continental Confederations.

Questioned on doping, he replied, reverting to his native Russian from English, that he considered this not only a Russian problem and talked about his work as part of the Independent Public Anti-Doping Commission headed by former International Olympic Committee member Vitaly Smirnov.

This developed a national plan to combat doping that was approved by the Russian Government.

Rossi was eloquent, impassioned and brimming with ideas.

But he was subjected to a relatively bruising question-and-answer session, which touched on both the alleged threats that had resulted in him being accompanied here by a police escort and the Court of Arbitration for Sport ruling from September which reduced a prior three-year suspension sufficiently for him to contest the election but continued to hold him responsible for "serious breaches" of the ISSF Ethics Code.

It was impossible to judge whether these exchanges had a decisive impact, but delegates visibly lost patience with one of the more aggressive questioners.

#ISSF General Assembly elected the four ISSF Vice-Presidents: Mr. Kevin Kilty of Ireland (162 votes), Raninder Sigh of India (161 ), Robert Mitchell of USA (153), and Wang Yifu of the People’s Republic of China, who was re-elected with 146 votes. Day-1 of the GA is closed.

Given that Rossi also stood up quite impressively to the scrutiny, it seems possible that the episode may have helped as much as hindered him.

Asked later if he was satisfied he had done everything he could, Rossi said: "Honestly, yes.

"We had a lot of difficulties that everybody knows."

Having been a vice-president of the ISSF for 20 years, he said he would continue to do his best for the sport.

"Shooting is my life," Rossi added.

The changing of the guard was made concrete in the day’s final session, controlled by a noticeably more relaxed Lisin and Ratner, sitting alone at the top table.

This consisted of a tortuous attempt to pick four new vice-presidents from an initial list of 15 candidates, using a "devil-take-the-hindmost" system.

Eventually, at just before 6pm, the winners emerged: Kevin Kilty of Ireland, Raninder Singh of India, Robert Mitchell of the United States and Wang Yifu of China.

As a further point of interest, today’s proceedings were the first time electronic voting had been used at an ISSF General Assembly.