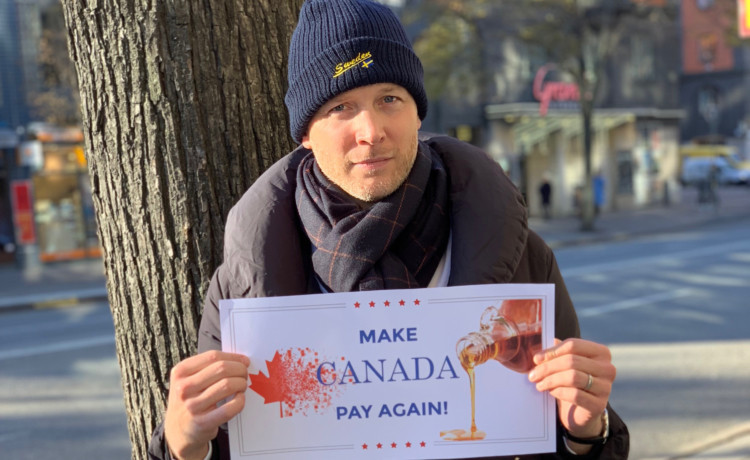 The Swedish Taxpayers' Association (STF) have claimed Calgary would make a better host for the 2026 Winter Olympics in a semi-serious response to residents of the Canadian city who backed Stockholm's bid for the Games.

Members of the Canadian Taxpayers' Federation (CTF), which is opposed to Calgary's bid to host the 2026 Winter Olympics and Paralympics, "endorsed" the Swedish capital earlier this week.

They claimed the city offered a model based on business support rather than public funding.

CTF members were pictured draping themselves in Swedish flags and carrying a plate of Swedish meatballs in a small demonstration across the road from an IKEA in southeast Calgary.

In response, the STF claimed they would launch a campaign called "Make Canada Pay Again", referencing the country hosting the Winter Olympics twice, in Calgary in 1988 and Vancouver in 2010.

"We are surprised to see our Canadian friends and allies are trying to foot the bill to Sweden," Christian Ekström, STA chief executive, said in a statement.

"Calgary - with average temperatures well below Stockholm - would be a terrific host.

"Suggesting that Stockholm is a good place for hosting the Winter Olympics is simply fake news.

"And we all know Canada must start winning again."

Ekström was photographed holding a sign with the slogan, along with a bottle of maple syrup.

While the respective "endorsements" have lightened the tone around the bid race, both taxpayers' associations have expressed concerns over the burden hosting the Games could have on residents.

"This does not need to be funded using billions of taxpayer dollars.

"If businesses want to use their money to invest, then why not?

"Taxpayers should not be footing billions of dollars for a sporting event."

Woooah we’ve got another taxpayer that thinks #Stockholm2026 is the best deal for Calgarians pic.twitter.com/TkQDsxE8yt

A plebiscite is due to take place in the city on November 13, which looks set to determine whether they will continue in the race to host the Games.

The International Olympic Committee, visiting the city this week, urged people to consider the economics of the Games rather than focus solely on the cost.

Stockholm's bid is also at risk after lawmakers in the new coalition running the city highlighted their concerns about spending taxpayer money.

Organisers of Sweden's Olympic bid have tried to assure Stockholm's newly formed local Government that the city's taxpayers will not be asked to foot the bill for the 2026 Winter Games if the bid is successful.

"We have not approached the notion of tax-based funding or any financial guarantees whatsoever for the operating costs of the Games," Mats Arjes, chairman of the Swedish Olympic Committee, said last week.

He added that the only financial guarantee required would be for "national security" which was already tax-funded.

Stockholm's bid team says 90 per cent of the venues that would be used for the Games already exist, and that only a new ice rink and a skiing venue need to be built.

A Milan and Cortina D'Ampezzo bid from Italy is also a candidate to host the Games.