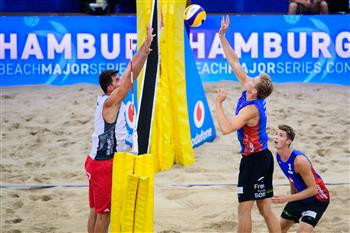 Anders Mol and Christian Sorum earned their 20th straight win today as they defeated Michal Bryl and Grzegorz Fijalek of Poland in the opening men's pool round at the Beach Volleyball World Tour Finals in Hamburg.

It was their 13th straight win on the FiVB World Tour for the recently crowned European champions.

While Bryl and Fijalek had a pair of matches today, starting with an opening morning win over third-seeded Alexander Brouwer and Robert Meeuwsen of The Netherlands, Mol and Sorum play two matches tomorrow against seventh-seeded Martin Plavins and Edgars Tocs of Latvia and sixth-seeded Adrian Gavira and Pablo Herrera of Spain.

After losing the gold medal match four months ago at the Commonwealth Games to Melissa Humana-Paredes and Sarah Pavan, Australians Mariafe Artacho and Taliqua Clancy gained revenge here today by defeating the Canadians in their opening pool match.

The Australian pair won 21-6, 21-19 over their sixth-seeded opponents.

"At the Commonwealth Games, the pressure was 10 times more," said the 24-year old Artacho, who is playing her first full-season with Clancy.

"It's always going to be a tough game against them but yes, we knew they had one on us so maybe they had a little more pressure than us."

Between them Artacho and the 26-year old Clancy have won four FIVB World Tour gold medals this season - the most titles by any men's or women's team in Australian international beach volleyball history.

The top eight teams qualified for each tournament, with the final two spots being awarded as wildcards.

The men's semi-finals and medal matches will be played on Saturday (August 18).

Women's pool play will continue through to Saturday morning, with semi-finals and medal matches being played on Sunday (August 19).