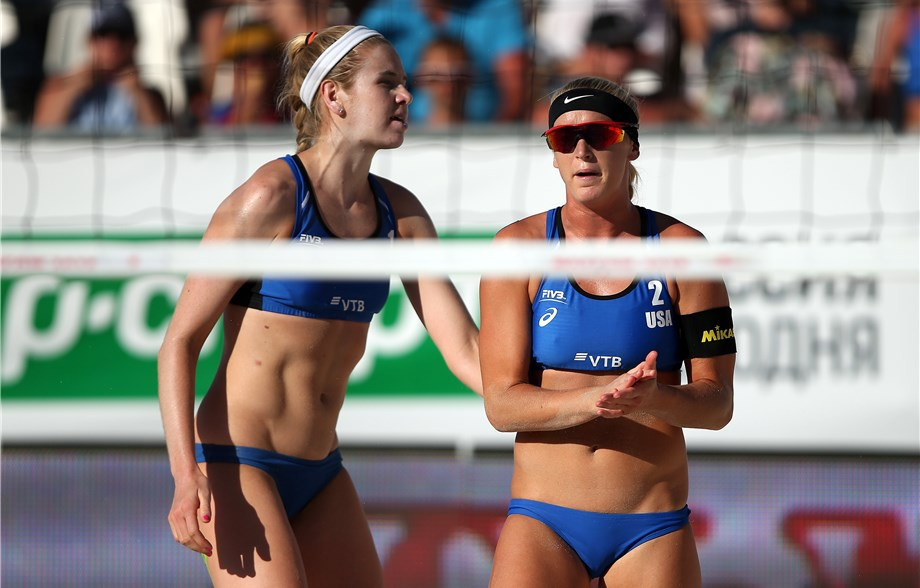 The United States pair of Summer Ross and Sara Hughes have capped their first season playing together by making the final of the International Volleyball Federation Moscow Open today.

The pair started quickly against Germany’s Julia Sude and Chantal Laboureur at the Four-Star Beach World Tour event in Gorky Park, and whilst the Germans did come back in the first set, the win was still sealed 23-21, 21-14.

"That team is so great and they are fierce competitors," Hughes said, after the duo reached their first final.

"Summer and I went out and our goal was to play our best and our hardest, and that is what I think we did today."

They will now play Brazilians Agatha Bednarczuk and Eduarda 'Duda' Santos Lisboa in the final tomorrow, after the South Americans beat Tanja Huberli and Nina Betschart from Switzerland 21-14, 21-19.

Hughes and Ross only made their debut as a pair at The Hague in January, but quickly established themselves as formidable opponents by reaching the quarter-finals.

They then won bronze at the Espinho Four-Star last month.

"The secret is just having fun and playing together," Ross said.

"We are just enjoying ourselves out here and I love playing with Sarah."

On the other side of the draw the Brazilians are now guaranteed a better finish than their bronze medal from last year in Moscow.

If they win it will be the fourth World Tour gold for Duda.

"It is crazy because she turned 20 ten days ago so she is very young, but is already playing at a high level," Agatha said.

"She is learning all the time, in every game and every tournament is like a lesson for us.

"That is why we are playing in this tournament even though we are already going to the Beach Volleyball World Tour Finals in Hamburg next week."

They will face Jamis Smedins and Aleksandris Samoilovs from Latvia, who beat the only remaining Russian pair Oleg Stoyanovskiy and Igor Velichko, 22-20, 12-21, 20-18.