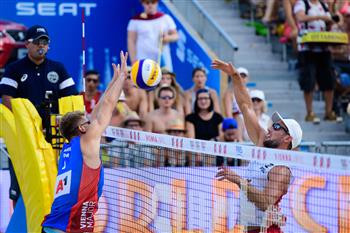 Anders Mol and Christian Sorum extended their winning streak on the International Volleyball Federation Beach World Tour to 12 matches as they earned their second Major Series gold in Vienna.

"Our side-out was really good and Anders had some really nice blocks that helped us," said Sorum after the title match that was staged before the Vienna Major bronze medal podium placer.

"We also served well and that was important.

"We are just having a lot of fun every time we play."

For the 23-year old Bryl and 31-year old Fijalek, who dropped their first match in pool play before recovering with five wins, it was the first podium placement on the World Tour in 16 events.

Mol and Sorum, who have a personal 19-match winning streak after winning seven contests two weeks ago at the European Championships in The Netherlands, were playing in their 15th event and are the first Norwegian team to win two World Tour gold medals in the same season since 1997.

On that occasion Jan Kvalheim and Bjorn Maaseide topped podiums in Portugal and the Carney Islands.

To reach the finals at the Vienna Major, Mole and Sorum defeated fifth-seeded Alexander Brouwer and Robert Meeuwsen of The Netherlands 21-18, 21-18 while Bryl and Fijalek earned a 21-15, 21-17 semi-final victory over qualifiers Cherif Samba and Ahmed Tijan of Qatar.