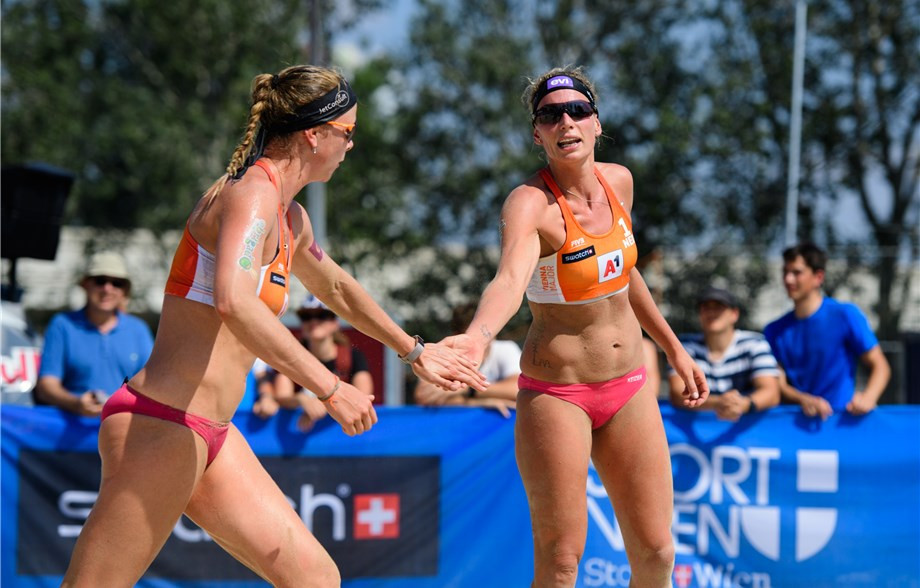 The Netherlands’ Sanne Keizer and Madelein Meppelink claimed two pool-play wins in Vienna today to ensure they will register their best-ever finish at a Beach Volleyball Major Series event.

Prior to winning the European Championships on home sand last month, the duo had never placed higher than 17th at an International Volleyball Federation (FIVB) Beach Volleyball Major Series event.

But back-to-back Pool A victories today, highlighted by a 24-22, 21-15 win over top-seeded Melissa Humana-Paredes and Sarah Pavan of Canada, secured a guaranteed ninth-place finish.

"The key was our patience today," Keizer, returning to play full-time on the FIVB World Tour after playing in only two international beach volleyball events the past two seasons, said.

"We learned in the European Championships to take our time and don’t rush our play - being patient has really helped us."

Combined with their 21-18, 21-15 win over the United States’ Kelley Larsen and Emily Stockman, Keizer and Meppelink secured the Pool A title and earned a "bye" for the first round of elimination.

The 17th seeds will have a day off tomorrow before they are due to resume play on Friday (August 3).

Brazil’s Agatha Bednarczuk and Eduarda "Duda" Lisboa were the only top eight-seeded team to win both of their matches today to win a group title.

Among the other teams winning pools unexpectedly were 31st-seeded Marta Menegatti and Viktoria Orsi Toth of Italy and 28th-seeded qualifiers Lauren Fendrick and Sarah Sponcil of the US.

Highlighting the upsets was Menegatti and Orsi Toth’s 21-16, 21-18 win over second-seeded Heather Bansley and Brandie Wilkerson of Canada in Pool B.

Fendrick and Sponcil had to defeat two of the three teams from Germany in Pool E.

It marked the 24th-time in FIVB World Tour history that three men’s or women’s teams from the same country competed in same pool.

In the men's event, home favourites Robin Seidl and Philipp Waller upset a higher-seeded team from Italy to advance to the main draw.

With eight men’s teams earning a berth into the pool stage, the 13th-seeded Austrians posted a come-from-behind 15-21, 21-9, 16-14 victory over fourth-seeded Marco Caminati and Enrico Rossi of Italy.

Among those advancing as expected were top-seeded Taylor Crabb and Jake Gibb of the US, second-seeded Mirco Gerson and Adrian Heidrich of Switzerland and third-seeded Gustavo "Guto" Carvalhaes and Ricardo Santos of Brazil.

Also through are fifth-seeded Ahmed Tijan and Cherif Younousse of Qatar, sixth-seeded Dries Koekelkoren and Tom van Walle of Belgium, seventh-seeded Grant O'Gorman and Ben Saxton of Canada and the eighth-seeded Esteban and Marco Grimalt of Chile.

Action in Austria's capital is due to continue tomorrow.