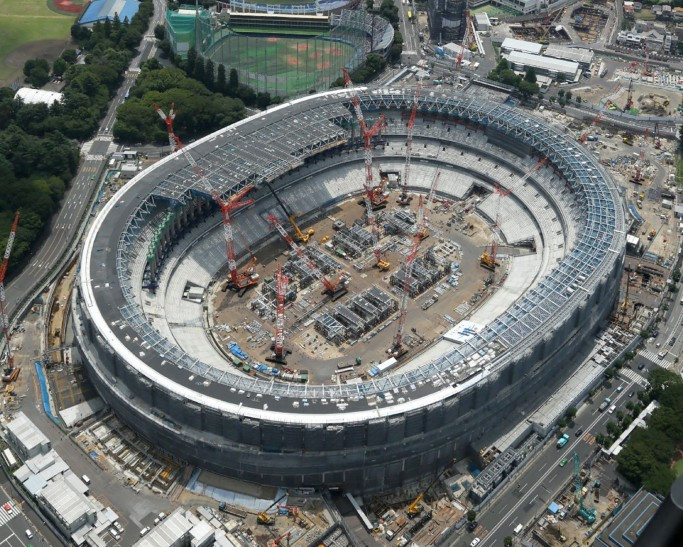 Tokyo 2020 have claimed preparations for the Olympic and Paralympic Games remain on track but delays constructing two venues could lead to the test event schedule being changed.

Organisers have today provided a progress report on the construction of venues with exactly two years to go before the Olympic Opening Ceremony.

According to Reuters, organisers have admitted that the Olympic Aquatics Centre and Sea Forest Waterway venues are currently two months behind schedule, which may alter the test event programme.

Tokyo 2020 claim the Olympic Stadium remains on track to be completed by November 2019, with the project currently claimed to be at 40 per cent ready.

Construction is being overseen by the Japan Sport Council, with the venue expected to have the ability to welcome around 80,000 people when complete.

The stadium will be used for both the Opening and Closing Ceremonies for the Olympic and Paralympic Games, as well as hosting athletics and football competitions.

It was originally due to stage matches at next year's Rugby World Cup in Japan but that plan was scrapped as it will not be ready in time.

It followed an initial design by Iraqi-British architect Zaha Hadid being axed due to rising costs.

The Musashino Forest Sport Plaza was the first permanent construction project to be completed.

It is due to host badminton and modern pentathlon's fencing round at the Olympics, as well as wheelchair basketball at the Paralympics.

Tokyo 2020 have stated the venue is already open to the public and has hosted dozens of multipurpose events.

"We have been informed that the two venues have a delay compared to the original schedule," he said to Reuters.

"We are working closely with the Tokyo Metropolitan Government (TMG) and the respective federations to be able to sort out and possibly modify the test event schedule."

The TMG are in charge of construction at both venues.

The Sea Forest Waterway, which will host canoeing and rowing events, is claimed to be 42 per cent complete.

It is expected the venue will be finished by May 2019.

The Games' canoe slalom course is anticipated to be finished during the same month, with progress claimed to be at 38 per cent.

The Olympic Aquatic Centre, home of diving and swimming at the Games, is forecast to be the last venue to be completed.

Tokyo 2020 said the facility is around 35 per cent complete with the venue expected to be delivered by February 2020, five months before the Games begin.

The Dream Island Archery Field and the Seaside Park Hockey Stadium are deemed to be 50 per cent and 16 per cent complete respectively.

Both venues are scheduled to be completed by June 2019.

A progress update is yet to be announced for the Olympic Gymnastics Centre, with Tokyo 2020 in charge of construction.

It is claimed the venue is still on track to be completed by October 2019, however.

Both the Olympic and Paralympic Games Athletes' Village and the Ariake Arena, the Games' volleyball venue, are expected to be finished by December next year.

The facilities are deemed to be 40 per cent and 16 per cent complete respectively.

The International Olympic Committee Coordination Commission praised venue construction progress on their most recent visit to the Japanese capital city earlier this month.