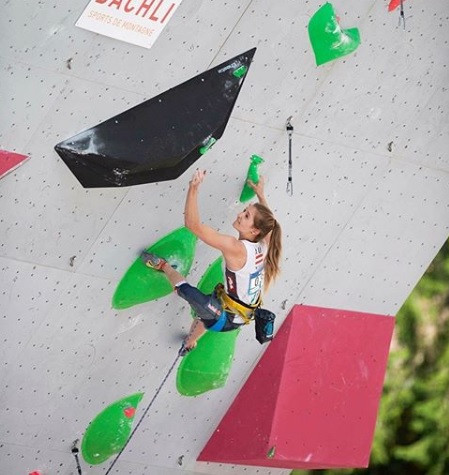 Austrian Jessica Pilz will bid for a second successive victory over Janja Garnbret of Slovenia when the two athletes renew rivalries at the International Federation of Sport Climbing World Cup in Briançon.

Pilz beat Garnbret to claim the first World Cup gold medal of her career during the last stop on the circuit in Chamonix.

Garnbret will be out for revenge during the competition in the French commune as she aims to bounce back from the defeat.

Both climbers have entered the latest event in Briançon, which begins tomorrow and concludes with finals on Saturday (July 21).

Overall lead leader Jakob Schubert, also of Austria, will look to continue a run which has seen him finish on the podium at every World Cup event held this season.

Jessica Pilz was definitely impressive in Chamonix. She was the only one to top the route in Finals and thus grabbed there her first ever Gold medal in a #IFSCwc! pic.twitter.com/ml56w9YftQ

Italian Stefano Ghisolfi, who gained ground with a top in finals last week, and German Alexander Megos are both expected to be among his main challengers.

The competition in Briançon continues the European part of the World Cup tour, with Arco in Italy scheduled to host the next event from July 27 to 28.

A total of 13 qualified athletes for the Youth Olympic Games in Buenos Aires are currently registered to compete across Briançon and Arco.